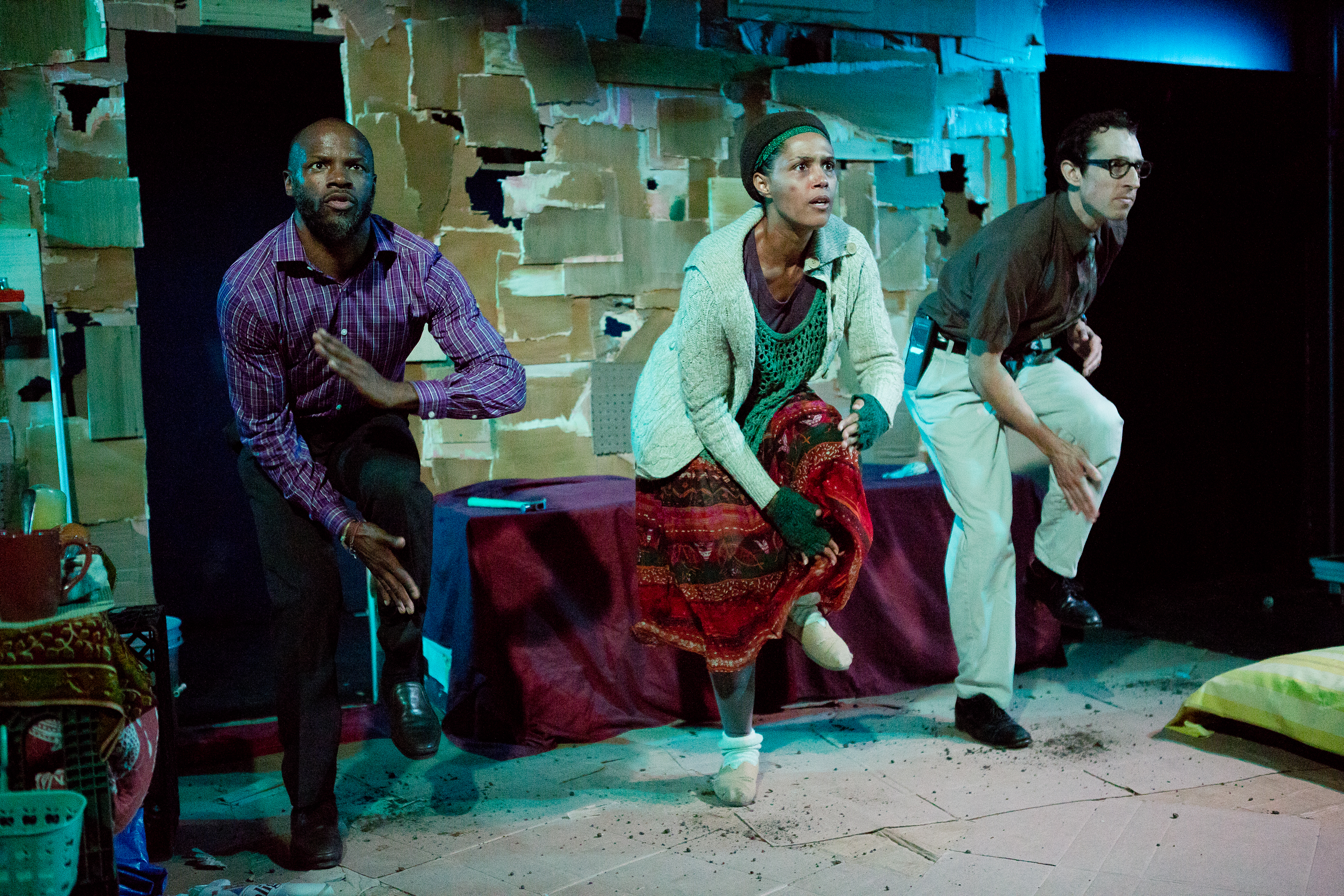 BOTTOM LINE: This three character play is more poetic than it is practical. It is a socially relevant albeit bleak tearjerker about post-Apartide South Africa and it will break your heart into a million pieces.

“Human beings are born inherently good, possessing so much light…we must find a way to forgive ourselves because everybody was part of Apartide, even those who suffered from it, and that will help get rid of our personal hate…” – Zoey Martinson, Ndebele Funeral

It seems there is a lot of personal hate to get over in Martinson’s Ndebele Funeral, a play that transports us to the tin shack ghettos of Soweto, South Africa. Though the audience is treated to rich and lively sights and sounds of South African song and dance, (a type of storytelling in South Africa called township theatre) it is also given a glimpse of how awkward and confused post-Apartheid South Africa is. When a government gets turned upside down, so does its people.

Daweti (Martinson) is a terminally ill young woman and living in the most devastating poverty imaginable. The tin door of her shack can be knocked down with a knock, she has no plumbing or electricity, and instead of using the building materials the government has provided to her to make improvements to her home, she used them to make a coffin because she has completely given up on her herself. Daweti was a brilliant young academic, on track to becoming a lawyer, but gave up on her life entirely when she found out she contracted AIDS. Her mental and emotional state can be summed up beautifully in the African song she sings at the top of the show. It’s called Njalo and some if it is translated as follows:

Daweti's best friend from her University years, Thabo (played beautifully by Yusef Miller) tries to inject her with some Pollyanna goodness. Thabo is a cheerful Christian, with the heart of a poet. Ever the loyal friend, he makes regular visits to Daweti and is her only connection to the world as her family disowned her when she became sick and she shut herself off from everyone else. Thabo brings her news and tries to inspire her to live a healthier, happier life.

Jan (brilliantly played by Jonathan David Martin) is a sad sack, over-worked, under-appreciated government schlub tasked with going door to door to the recipients of the government building materials to make certain they are used correctly. After getting the runaround from Daweti earlier in the play, he returns none too happy. Tensions run high and emotions escalate to dramatic and almost unbelievable proportions until some very difficult decisions are made.

Everyone had or has aspirations to be something greater. Daweti was on track to become lawyer, Thabo a writer, and Jan a philosopher. All three actors do a tremendous job. Never before have I felt the urge to run on stage and interact directly with the characters. I constantly wanted to shake some sense in Daweti, hug Thabo for being such a sunshine buttercup, and slap Jan for being such an uptight jerk who couldn’t appreciate the value of the cultural and philosophical opportunities that were his for the taking with his current position.

The director, Awoye Timpo, does an amazing job of showing us this world. I really felt transported. It’s a real talent to show a confused, uprooted state of being with such harmony and clarity.

After seeing this piece, I wanted to learn more (especially about what the name of the tree was that was referenced in the play that is integral to an Ndebele Funeral). I stumbled upon this link that gave me some answers. Go and see the play, read the research, and have amazing conversations with your friends: http://www.ulwazi.org/index.php5?title=Umganu