Tickets are no longer available as this production ended its run before the review's publication date.

Off Off Broadway, New Dance
Ran Through 2.9.14
The Joyce Theater, 175 Eighth Avenue 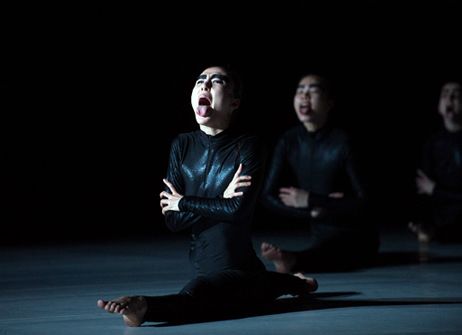 BOTTOM LINE: A relative newcomer from the Israeli dance scene presents an edgy, feminist and aggressive side of the female psyche. Expect to be challenged by this dance show.

Last weekend, LeeSaar The Company presented an evening length work, “Grasses and Jackals,” for seven female dancers. A husband and wife team, Lee Sher and Saar Harari have been among the few educating New York for the last ten years on the kinesthetic technique of Gaga. Gaga was developed by esteemed choreographer Ohad Naharin of Batsheva Dance. This technique goes against the classical aesthetic lines of ballet and even classical modern dance. It encourages dancers to move in a more primitive, animalistic quality, taking the everyday human gestures and manipulating them to skew their meaning.

The look and feel of the show had all of the elements of high art. The dancers were incredibly inventive and exceptional performers, but somehow it left me wanting. The fluid and sensual phrases went around and the dancers tried to one up each other with intricate phrasing. It seems that the audience was watching and were watched by a conveyor belt of beautiful creatures arrested in a crouched leg spread pose right at the front of center stage. The repetition of this stare down made for an objectification.

The lighting and stage design by Avi Yona Bueno was superb and lent another worldliness to the piece. It felt like neither light nor dark with side lighting carving out their sinuous muscles as if we were in a constant state of dawn and dusk. Naomi Luppescu created in the costumes an updated jackal herd in sexy, black, liquid leather unitards that fit so well they seemed painted on.

The musical choices were brilliant. The sounds and music ebbed and flowed into one another for a seamless transition.

At one point, a voice spoke of being afraid of desolation and loneliness. The women moved as individuals, but the choreography made it hard to focus on any one dancer until stunning solos and then a duet occurred. Unlike other moments, attention was focused as the two women's need for each other was passionate and chemical and then alternately that dependence seemed disgusting to them. The other dancers seemed frozen in space as a Greek chorus reacting to a drama.

These moments where my focus was honed were the most gratifying. At the end, one woman stripped down out of her black and glowed like a statue in a gold unitard and silver thread streamers fell from the stage as a cascading waterfall. It felt like a moment in Avatar. Lee and Saar have a gold mine in their hands. They just have to figure out how to shape it. What a great first run at the Joyce Theater!

(LeeSaar The Company's "Grasses and Jackals" played at the Joyce Theatre, 175 Eighth Avenue, February 8 and 9, 2014. For more information about LeeSaar visit http://www.leesaar.com.)