King of Kong: A Musical Parody

Off Off Broaday, New Musical
Runs through 8.19.14
The Players Theatre, 115 MacDougal Street 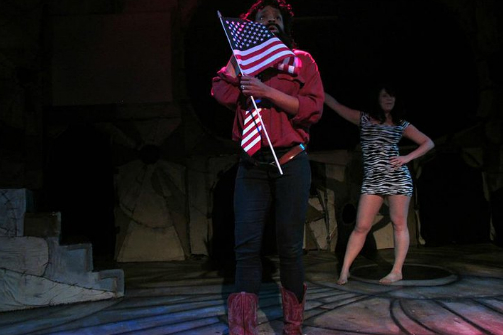 BOTTOM LINE: A hilariously entertaining production thanks to the its creators and stars who are having the time of their lives, King of Kong is an example of what the New York Fringe Festival is all about.

Personally I haven’t seen the documentary that serves as the inspiration for this entertaining frolic, but the work of Amber Ruffin & Lauren Van Kurin (who wrote the piece and also play a total of eight roles) has inspired me to seek it out. It is the story of Steve Wiebe (Van Kurin) and Billy Mitchell (Ruffin), two men battling for the high score in the Donkey Kong arcade game. Through all of the zaniness of cross-gendered performers, silly dance numbers and winks at the audience, there is still a core depiction of the American Dream, where anyone has a chance at greatness. Wiebe’s long-suffering wife and potty untrained son serve as inspiration for him to try to make something of himself while Mitchell’s vacant-headed breast-implanted wife and national hot sauce business are the frivolous accoutrements of ‘success’ for the lower middle class in our nation.

This subtlety really has no bearing on the simply great time that King of Kong bestows upon its audience. Kurin and Ruffin have an effortless chemistry the likes of a female Matt Stone and Trey Parker, and their sensibility of humor is just as edgy and on target. I’m sure everyone will have their favorite character (caricature) in this piece, but mine was definitely Mitchell’s wife rolling around the stage during her husband’s Hot Sauce commercial.

The music by David Schmoll supports the piece while not trying to overshoot its milieu. Brendan Hunt’s direction keeps the piece moving and gives enough flexibility for the stars to really connect with and include the audience in their jaunt of fancy. Wiebe sings “Failure is Just a Success That You Failed to Succeed At,” and King of Kong is just a success all around.