The Illusionists - Witness the Impossible

Conceived by Simon Painter; Directed and choreographed by Neil Dorward 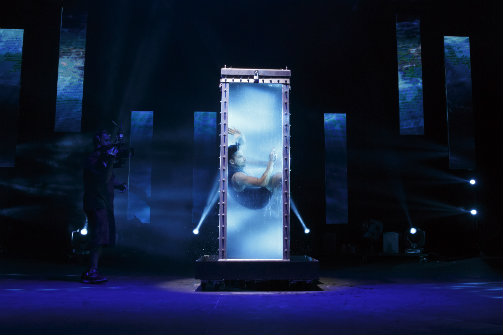 Andrew Basso in The Illusionists. Photo by Joan Marcus.

BOTTOM LINE: The magic is a little old hat.

On September 21, 1912, Harry Houdini premiered his Houdini Upside Down!, a ground-breaking performance which featured Mr. Houdini being lowered upside down into a tank of cold water, handcuffed and shackled at the ankles.

In 2014, “The Escapologist” Andrew Basso, backed by a quintet of electronic musicians providing dramatic underscoring, performs the same death defying spectacle at the Marquis Theatre, and after three tense minutes of breath-holding by both Basso and the audience, he emerges from the top of the tank having bested the cuffs, shackles, and a padlock. It’s impressive. And it does seem to be real - “The Trickster” Jeff Hobson assures us “this is not an illusion”. But then...Houdini did it 102 years ago.

This might be too harsh a criticism, but it seems to be the tenor of the entire act: a grandiose presentation of tricks that have been seen in magic shows large and small, updated and varied slightly, but largely relying on time-tested tropes and conceits. Then to boot, a glaring omission of female performers. A handful of women in corsets and stockings dance and carry props in amorous subservience to the master illusionists, but the performance is otherwise decidedly male. Also to the production's discredit, the comedy of many of the performers relies on dated sexist banter with the audience. In a particularly uncomfortable moment, “The Anti-Conjuror” Dan Sperry requests a female volunteer, clarifying “if you’re a dude who thinks he’s a female…doesn’t count.”

Despite many drawbacks, the show succeeds when it really stretches the conventions of illusion. “The Inventor” Kevin James’ striking new take on the ‘sawed-in-half’ trick is stomach turning, the off-color Sperry’s innovative work with birds leaves you wishing the other acts had as much to offer, and Hobson’s pick-pocket work is the most entertaining portion of the evening.

It’s just that there is also a cameraman running around the stage for an unforgivable portion of the show, directly blocking the performers and forcing the audience to refer to the overhead screen. At times things are happening so rapidly it’s hard to even catch what the trick was. The whole event feels a bit "made-for-tv." Maybe it would be more enjoyable there.

(The Illusionists - Witness the Impossible plays at the Marriott Marquis Theatre, 1535 Broadway, through January 4, 2015. For the next few weeks performances are Tuesdays through Thursdays at 7PM, Fridays at 8PM, Saturdays at 3PM and 8PM, and Sundays at 3PM and 7:30PM. Beginning Sunday December 21 the schedule changes for the holidays; see ticketmaster.com for more information and to purchase tickets. Tickets are $67-$157; premium seats are also available. For more information visit www.theillusionistslive.com.)