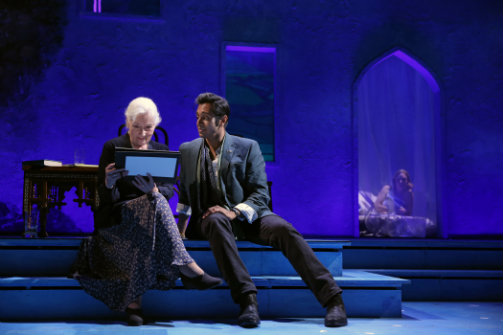 Poetry and portraiture may seem the stuff of stodgy parlor pontificating, but in the unrivaled hands of Tom Stoppard, they sing with mystery and passion. Receiving its New York premiere at Roundabout Theatre Company’s Laura Pels Theatre, Stoppard’s under-appreciated Indian Ink moves seamlessly from 1930s India to 1980s England with cultural and emotional relevance still ahead of its time nearly two decades after its London debut.

Flora Crewe (Romola Garai), an English poet traveling to warmer climates on doctor’s orders, arrives in fictional Jummapur, where she makes the acquaintance of Nirad Das (Firdous Bamji), an Indian painter and fervent admirer of English life. He wishes to paint her portrait as a gift, and she consents. Some 50 years later, Eldon Pike, academic and student of Crewe’s life, assembles The Collected Letters of Flora Crewe, visiting Crewe’s sister, Nell (a sublime Rosemary Harris), to unearth the details of a certain “smudge of paint on paper” Flora speaks of in her correspondence with her sister. As Pike (endearing Neal Huff) follows Flora’s transnational paper trail, reality and memory intersect across cultures and decades, and Stoppard’s delicious language engages the transient beauty of family, sex, and art.

English actress Garai brings an impressive performance as Flora Crewe to her off Broadway debut, deftly navigating mouthfuls of ornate witticisms, but Bamji as portraitist Das delivers some of the best work of the fall season. His sensitively meek portrayal flutters between bashful servitude and forceful discipline, developing a relationship to Crewe that is as awkward as it is sensuous. Their clash of Indian and English customs brings about many of the most delightful moments in the production. When Nirad’s eager-to-please sensibilities keep Flora from broaching a delicate question, he remains stubbornly sanguine: “The unasked, the almost asked question, united us for a moment in its intimacy, and the redness of the day’s letter will not be denied.” In the company of the luminous Bamji, certainly not.

The production’s diverse cast offers several exceptional performances, notably from Bhavesh Patel (as an earnest Anish Das, son of Nirad), and Nick Choksi (a spirited Dilip, Pike’s companion in India), to name only a few. As the play winks at Westerners' misappropriation of Indian culture and history, so too the ethnic diversity of Ink’s company nods to an underrepresented population in American theater. In an interview with Playbill, Stoppard attributes the play’s overdue arrival to a shift in the landscape of the New York stage: “it was much more difficult than it has since become to cast a play which needs quite a number of Indian actors.” Roundabout’s production perhaps then marks progress that is to be applauded.

Stoppard’s ability to weave the social graces and relationships of distant people and generations transports us to a sumptuous world beyond our own and makes us feel at home. True to form, he guides us through the dense labyrinth of intimacy, and through the melodic joy of the English language.