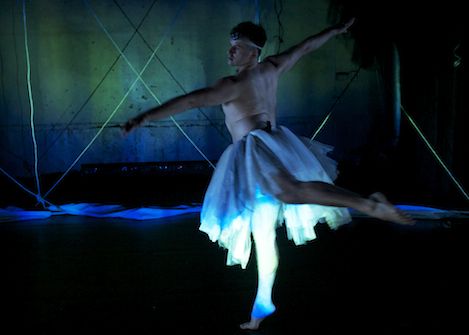 Eammon Farrell in I LAND.

BOTTOM LINE: The use of audience collaboration in this piece makes it a unique, one of a kind production.

Your first crush, your reoccurring dreams, how you felt about yourself as a child, and music that holds meaning for you – no these are not topics of your next therapy session, these in fact are the topic of Incubator Arts’ one of a kind production I Land. I Land takes material generated by the audience so that your life experiences become interwoven into a multi-media theatrical piece. As soon as I entered the theater space I was run through a series of activities that involved drawing a picture of myself in the past, recording music, and adding on to a Lego city being constructed. I then was led to what felt like a group therapy session with an interviewer asking personal questions and thrusting a microphone in our faces, most of which related to childhood. The show’s cast then sat on computers and took note of what they deemed to be the most significant anecdotes divulged. After the interview portion was completed the cast then began to perform a show that interwove some bits of the audience’s responses, showing different cast members in different corners of stage, performing the audience’s words while they went through such motions as making coffee and waking up in bed. (A cleverly placed teleprompter screen helps the cast work with stories they would never have had adequate time to memorize.) Throughout the piece video projections, video clips, and live musical performances help to hold the audience’s attention. Questions were obviously asked to fit into a specific structure as the play had planned segments on such areas as dreams, memorable driving trips, and childhood crushes.

As I was feeling a bit shy and attended the show alone, I spoke up only a little during the interview as did many of my fellow audience members. As a result most of the material in the play came from the same three people (and a planted cast member) so it made some of the material a bit repetitive in nature. As the performance of I Land that I attended was during Super Bowl Sunday, I am sure that future performances will have much larger audiences that will generate more expansive material.

Cast member Jessica Weinstein sang a cute bluesy number in a sequined gown about one audience member’s crush, who seemed cooler than all the other boys in New Jersey because he wore “a dirty t-shirt.” In another scene an audience member’s childhood fear of a whale falling onto her house was dramatically reenacted. Liz Davito provided much of the music for the piece and was a welcoming and attention grabbing element on the stage. Cast member Lucy Kendrick Smith was an engaged interviewer, who then performed the experiences of her audience with palpable emotion.

I Land is a truly innovative concept, unlike any other attempts at audience collaboration that I have seen. It offers an unusual perspective on the role of memories and the human experience, imbuing the moments of one’s life and mindscape with meaning. By using material harvested from the audience, the show gives the audience members a new way of seeing their own life stories.

(I Land plays at Incubator Arts Project inside St. Mark’s Church, 131 East 10th Street, through February 9, 2014. Performances are Thursdays through Sundays at 8PM. Tickets are $18 and are available at incubatorarts.org or by calling Theater Mania at 212.352.3101.