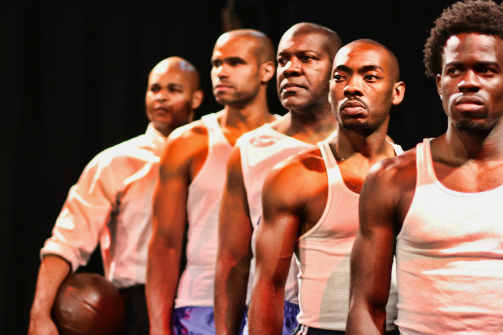 In the first production for the Layon Gray American Theatre Company, Gray shines a light on the largely forgotten, but amazingly true chapter of the 20th century when the Rens were one of the most dominant teams playing. The Harlem Rens (named for the Renaissance Ballroom and Casino on Adam Clayton Powell, Jr. Boulevard and 137th Street where they practiced and played their home games) were the first all-black, African-American-owned professional basketball team in the U.S., racking up an outstanding 2500 wins during their four decades before the sport was integrated in 1950.

It’s the 1938-’39 season, when the team would go on to win 122 games and lose just 7. Taking command of the stage and team as the Big Five are introduced is Melvin Huffnagle’s Pops, the coach of the Rens. Using his booming voice to guide and motivate as they are about to go into the largest stadium they’ve traveled to, he tells them “historical moments are created from opportunity.” It’s a refrain that will reverberate again and again for them. For two years in a row, while besting teams in the Jim Crow South, they’ve been denied the chance to join their white counterparts in the segregated league. Pops proclaims “our success will not be determined by what anybody thinks.”

They’re anchored by JoJo (Thaddeus Daniels), the oldest, who goes back to the team’s beginnings in the 1920s. Would-be ladies men LeRoy (LaMar Cheston) and DeeDee (Delano Barbosa) bring the speed and youthful competitiveness. Nathaniel (Layon Gray, doing triple duty) is the comic relief, newly arrived from the South, “with a lot of wind to him” as he talks up a storm about life back home. Before going out before a crowd of 20,000 they all come together and forcefully assert their pride in unison saying “Renaissance. Harlem.”

The play flash-forwards many decades to Benjamin Coffee III (Huffnagle), Pop’s great-grandson, as he gets a hard-won meeting with a landmark’s preservation board and pleads his case for saving the ballroom. Built by black businessmen, the two story building has, like the Rens, been overlooked and ignored by subsequent generations fallen into disrepair with mushrooms growing on the club’s floor.

In addition to the inherent conflict that comes from the rampant racism and violence of the era, there is also tension internally, brought on by Clem (Ade Otukoya), an angry orphan who saw his parents murdered in The Rosewood massacre. He shows up late for practice and is hostile toward everyone, in particular JoJo, who sees his own murdered son in Clem. JoJo tries to give him pointers and attempts to reach him through the words of Zora Neale Hurston's novel Their Eyes Were Watching God, a book Clem is using to learn how to read. This subplot didn’t strike as strong of a chord for me although it does give JoJo a moving scene as he shares with Clem how the Rens saved him after everything fell apart for him. It made JoJo even more endearing as he ultimately unifies the team.

Gray has little more than two hoops and five basketballs to work with but the cast makes effective use of the minimalist set. A number of the actors are also working together in Gray’s ongoing production Black Angels Over Tuskegee and their camaraderie is evident as they come together as a very tight, winning ensemble. Even if the Harlem Rens didn’t have a stellar season that culminates in them being one of two black teams to play in the first professional basketball tournament in 1939, the heartbreak and heart of the team are fully felt.