Book by Mark Roberts; Directed by Jay Stull
Produced by The Amoralists 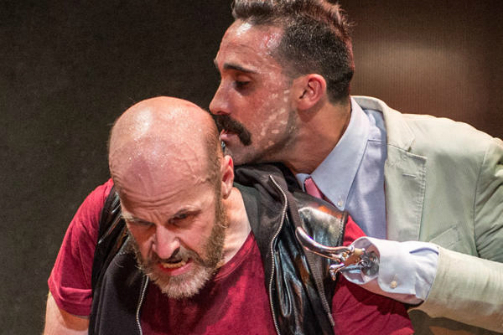 Mark Roberts and Matthew Pilieci in Enter at Forest Lawn.

BOTTOM LINE: A bizarre and twisted look into the tortured life of a big time Hollywood television producer grappling with his own internal demons and battling with the tabloid exploits of his out-of-control star.

Mark Roberts served as a writer and executive producer on the hit television comedy "Two and a Half Men" for seven seasons. Based on his latest play, Enter at Forest Lawn, this experience really did a number on him.  This comes as no surprise, really. I mean, I can only imagine the shenanigans that really went down with writers and producers dealing with the much publicized struggles that Charlie Sheen had with alcohol, drugs, and questionable exploits with the ladies during the height of the popularity of this mega hit show. It must have been awful. Clearly, Mr. Roberts still has a bit of mental collateral damage from the whole experience that he is addressing in this play. Enter at Forest Lawn is being performed in repertory with The Qualification of Douglas Evans, for what the Amoralists are calling The Gyre: "a two-play repertory exploring man’s vicious cycles.”

The Gyre is a section of the Pacific Ocean that is also known as the Great Pacific Garbage Patch. Located between the coasts of California and Hawaii and covering an area of nearly five million square miles, one can find over 11 tons of floating plastic in our oceans creating a swirling trash vortex. Nice image huh?  Hopeless. Bleak. Sad. Terrifying.  Welcome to the world of Jack Story, portrayed by the playwright Mark Roberts.

Fans of "Seinfeld" might recognize him as Seth, a friend of Jerry's who misses an important work meeting to catch up with Jerry, then gets fired, and then is forced to work at Kenny Rogers Chicken. (It's a pretty good episode.) His performance in this latest offering is a far cry from charming guest staring work on a string of television comedies. Roberts portrays Jack as an acid tongued, no nonsense television writer with a hit sitcom about to break into syndication. Not only is he dealing with a troubled star, but his turmoil is fueled by a useless lawyer (David Lanson), a bumbling assistant (Sarah Lemp), a femme fatale executive (Anna Stromberg), and a one-handed hook-wielding war vet who wants to break into show business (Matthew Pilieci).

While the premise might sound exciting, the end result is a little exhausting. We are greeted in the space by creepy-ass music, a stark set, canned laughter, random television static, and mysterious grumblings and growlings. It felt more like we were about the see a theatrical staging of the popular horror franchise Saw, rather than a dark comedy about Hollywood. In all actuality the play itself is pretty horrific in its own right.  Several actors adopt mangled, hunched over physical characterizations to bring their fractured characters to life. It felt as if we were witnessing the mental demise of a man who was trying so hard to keep his life together despite the shit storm swirling around him.

Some interesting directing choices by Jay Stull make the piece seem cold, alienating, and relentless, which may have been the intent but it's not super fun to watch. That being said, Enter at Forest Lawn grew on me after I left the theatre. As I was watching, I felt uncomfortable, confused, and frustrated. It's empathetic theatre at its best. You definitely feel a small piece of what the main character is going through, but it's not an emotional journey that most folks will want to face head on. Once you let the dust settle, you realize that we all are dealing with this ominous swirling cloud of mental and physical debris that could easily consume and destroy us; it's our job to fight against that and keep our head above the water and not let things spiral out of control.

Enter at Forest Lawn is a relentless 70 minutes that never lets up and gives the audience little room to fully process what exactly it is that they are witnessing. It might be a little self indulgent and a little over-directed, but it is worth experiencing for the adventurous theatregoer looking for something that delves deep into the vicious cycle of man and what it means to confront our inner and outer demons with gusto.

(Enter at Forest Lawn plays in repertory with The Qualification of Douglas Evans at Walkerspace, 46 Walker Street, through August 9, 2014. Performance schedule varies and can be found at theamoralists.com.
Tickets are $40, and $20 for students, and can be purchased online theamoralists.com.)