The Death of Thomas Edison

Off Off Broadway, New Multimedia Play
Runs through 8.14.14
Flamboyan Theatre at the Clemente, 107 Suffolk Street 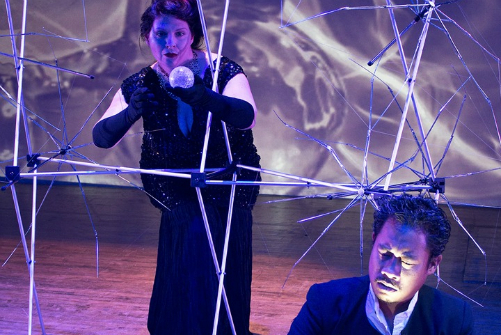 Emel Ertugrul and Edwin Castillo in The Death of Thomas Edison. Photo by Erlene Hendrix.

BOTTOM LINE: This play takes you on a surreal trip down the spiritual rabbit-hole of Thomas Edison’s purgatory. It’s almost like Waiting for Godot, but God is already there and you and He are both waiting for forgiveness and faith to move on.

Warehouse of Theatre from Norfolk, Virginia brings an almost Beckettesque glimpse of the battle of two major egos -- that of Thomas Edison (Rob Wilson) and "God" (Edwin Castillo). This god (or “creator”) isn’t a dude with a long white beard sitting on a cloud and filled with omnipotence; rather he’s a useless drunk often asleep on the job, and he’s named Ratbag. Edison is presented to us at the start of the play as a man filled with doubt and pain and still tied to the life he left behind on Earth. He cannot move on and let go and often thinks of his first wife, Mary (Emel Ertugrul). Ratbag is stymied by his drunkenness and has a score to settle with Edison, because Edison has “flown too close to the sun” like Icarus and deigned to also become a creator of light. The play is interesting and thought provoking and, at times, very heartwarming.

The Death of Thomas Edison does have its dramaturgal Easter eggs -- like the playing of Mary Had a Little Lamb which was Thomas Edison’s first recording on the phonograph -- but it is not at all a biography of Thomas Edison. It is more of a psychological and philosophical experience infused with music and multimedia.

Edison has a “come to Jesus moment” (see what I did there?) and can finally move on when in a very What Dreams May Come way, when he realizes that he needs to let go of his wife because it hurts her to hang on. He also lets go of some guilt and anger and when he returns to converse with Ratbag, he does so in a new way. He’s humbled and takes a kinder approach. Instead of calling Ratbag names and treating him like bum, Edison declares his faith and that declaration of faith renews Ratbag’s God-like abilities.

And here’s why I’m grateful for companies like Warehouse of Theatre and for writers like Lee Smith: we live in a world that is at war and always on the brink of more war. As a society, we need to be reminded that conflicts aren’t resolved with more ego and put downs and selfish behavior; they end when one side lets go and gives a little. Once that is done, the other side drops their defenses and gives back, and then before you know it, you have these two formerly-warring sides giving each other what they need to progress and move on and be happy.

Edwin Castillo gives a standout performance as Ratbag. Director Katherine Hammond and the designers all worked together to form a cohesive vision of the world they presented, though I did find some of the blocking a bit unnecessary (including a downright campy tableau of God and David).

Overall, I think the show is full of great ideas, but falls a bit short on execution and it does need an editing eye. I would definitely check out another production of Warehouse of Theatre’s in the future.

(The Death of Thomas Edison plays at the Flamboyan Theatre at the Clemente, 107 Suffolk Street, through August 14, 2014. Running time is 1 hour without intermission. Remaining performances are Sunday 8/10 at 3PM; Wednesday 8/13 at 3PM; and Thursday 8/14 at 5:30PM. Tickets are $18 and are available at fringenyc.org. For more information about Warehouse of Theatre, visit warehouseoftheatre.com.