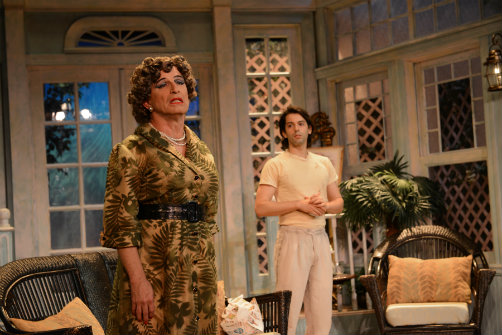 BOTTOM LINE: This adults-only comedy with a queer twist is silly and well-acted, but not destined for immortality.

The Florida Keys. A rich spinster. A would-be artist in a leg brace. A visitor from Cuba. A frustrated magician. These are the building blocks of Drop Dead Perfect, an original play that spoofs 1950s film and TV. The final product doesn’t really make sense, even as a wacky comedy, but it gives four game performers plenty of room to do their thing.

The script, by novelist-turned-playwright Erasmus Fenn, is crammed full of references to famous plays and movies, from the serious (The Glass Menagerie) to the campy (Whatever Happened to Baby Jane?); in fact, the plot is eventually taken over by allusions to a certain classic sitcom starring a daffy redhead and her Latino spouse. Despite the retro setting, the play’s tone is decidedly adult, with endless dirty puns and double-entendres, both straight and gay. Director Joe Brancato and the cast treat the material with the seriousness it deserves -- which is to say, none. Quinton shows the total commitment to absurdity that has won him two Obie Awards, and everyone else follows his lead. (Cook and Cruz deserve special credit for their legit Latin dance number.)

It’s evident that this is writer Fenn’s first play, but at a trim 90 minutes, its issues (like the fact that the magic subplot goes nowhere) can be overlooked by those who are seeking a well-executed broad comedy. It’s a throwback not only to the soapy and slap-happy entertainment of Hollywood’s Golden Age, but also to the golden age of downtown theatre, the early ‘80s, when Quinton and his cohorts changed the game. Drop Dead Perfect isn’t, but its star is still in fine form.