Columbia: the life and death of Rospo D. Oro

Book and Music by Collin Simon; Lyrics by Liz Muller; Directed by Liz Muller
Inspired by Kenneth Grahame's The Wind in the Willows
Produced by Pipe Dream Theatre 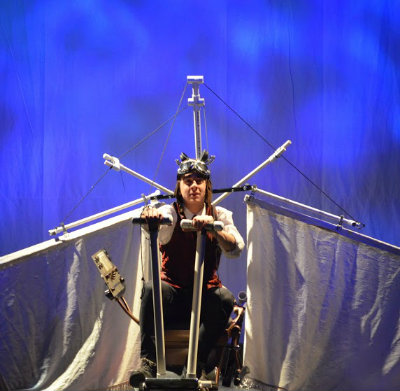 BOTTOM LINE: Exploring an old classic in a fresh way, a strong ensemble helps to iron out flaws in this epic adventure.

Billed as “a new steampunk fairytale musical,” Columbia: the life and death of Rospo D. Oro is as ambitious an undertaking as any I’ve seen in a small off Broadway production. I say small, but this rambunctious musical boasts a cast of eighteen as well as a score that sounds more like a film soundtrack than musical theatre. The show is essentially an adaptation of The Wind in the Willows, albeit with some extra adult content that spices things up a bit. Rospo is Mr. Toad, whose recklessness endangers the Wild Woods time and again despite the efforts by his close circle to keep him from being the architect of his own demise. This ragtag crew has a myriad of adventures ranging from Disney-esque banquets, fairy tale kingdoms of beauty so extreme they can drive a man to his death and even a trio of Strangers-inspired highwaymen bent on collecting dismembered fingers. Ultimately, somehow, the message is to accept people for who they are and to open one’s eyes to what’s been in front of them all along.

The show is very cinematic, and I suspect that it would indeed work better as a film. That being said, the cast is precious enough to help overlook the rough edges; and the talent that has gone into this production both onstage and off is worthy of an audience’s attention. Alex Parrish as Rospo is pretty wonderful and bound to have a strong career. Liz Muller breaks my usual prejudice against performers being in their own work -- she's both plucky and adorable as Netty, the mole from the source material. Amanda Teneriello is touching as the overlooked Jewels (who I think is representative of the Water Rat), just to name a few.

Much like its hero, the production is a potential giant train wreck...that manages to become a little engine that could. I mean this in the best of ways. Every time it felt as though things were bound for disaster, a clever rhyme, a bit of soaring melody or a moment of unexpected staging rescued it from the abyss. By no means perfect, it was engaging enough that I plan to attend others productions by Pipe Dream Theatre and I am excited to see this ensemble grow and prosper.

(Columbia: the life and death of Rospo D. Oro plays at the Beckett Theatre, 410 West 42nd Street, through January 25, 2014. Performances are Tuesdays at 7PM; Wednesdays through Fridays at 8PM; Saturdays at 2PM and 8PM; and Sundays at 3PM. Tickets are $26.25. To purchase tickets visit telecharge.com or call 800-447-7400. For more show info visit columbia.pipedreamtheatre.com.)