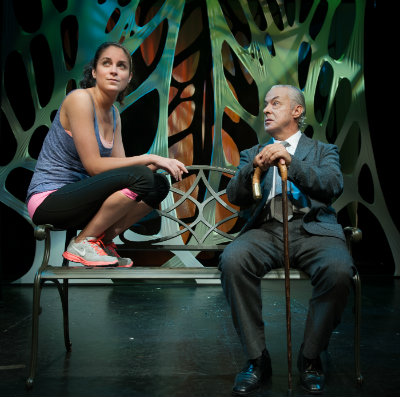 Hannia Guillen and German Jaramillo in CITA A CIEGAS.

BOTTOM LINE: The dramatic situations that unfold in this production are made intriguing and believable through strong performances.

I have never been to Argentina, but if the literature and plays originating from the country are any indication, it seems to be a country that greatly values romance and idealizes romantic love. Cita A Ciegas ("blind date" in Spanish) certainly follows this pattern with a story that involves forbidden love and love at first sight. Occasionally, the dramatic moments of Cita A Ciegas are so melodramatic the tone veers from drama to that of comedy.

The play opens with a character known simply as Ciego (German Jaramillo) sitting on a bench in a park. A man sits beside him and recognizes Ciego as a famous author. The conversation is slow paced at first, filled with clichéd pontifications about romantic ideals and sentiments. During the course of the conversation Ciego reveals that he once fell in love at first sight with a young woman he never saw again. This prompts the man to dive into his own romantic situation. At the age of 50 the man has spent most of his life dutifully going to his job as a bank manager and being faithful to his wife despite the lack of passion in their marriage. The man however has had his dull life transformed by a younger woman whose passion for living has ignited a passion in him, causing him to behave impulsively and irrationally. He empties out his savings to buy a nude painting of the woman because he believes that by possessing the painting he will “possess her.” After having slept with her, the man now dons disguises and stalks her throughout the city. After the man has departed, a female (Hannia Guillen) comes by and upon recognizing the writer, also decides to confess her current romantic entanglements. We soon learn that this woman is the very same woman the man had been speaking about previously. Although curious about the man’s fascination with her, she does not return the man’s feelings and slept with him merely out of gratitude to him for buying the painting. She plans on moving to London to pursue her artistic ambitions, abandoning both the man and her own lost love.

In the following scene, which is the most engaging of the play, we see the wife of the philandering man (Zulema Clares) working as a psychologist. The woman she is counseling (Beatriz Cordoba) just happens to be the mother of the young woman in the previous scene. The mother is upset and complaining about the lack of passion in her marriage. She has never been able to feel love or attraction for her husband. The psychologist tries to reassure her by saying that passion is not the most important thing in a marriage. The mother turns the table on the psychologist and begins to question her instead, forcing the psychologist to realize that perhaps she has her own problems. Through the following scenes we see the lives of the people destroyed by their pursuit of their passions, while others are able to reconcile the love they missed out on many years ago.

The production of Cita A Ciegas provides an interesting mix of comedy and drama, a tone that makes the most melodramatic moments more palatable, but one that also makes the overall message/vision a bit unclear. When the wife confronts her husband about his wig and mustache disguise, he forcefully puts them on his face with a maniacal look, showing that he has given himself over totally to his obsession. The goofiness of the entire scene solicited much laughter and made the man’s fixation seem silly. The strong performance by Luis Carlos de La Lombana (who also shined in the Repertorio’s production of Love in a Time of Cholera) makes the dramatic events that unfold more captivating, as do strong performances by Hannia Guillen and Zulema Clares. De La Lombana makes his character’s mercurial desires and absurd actions seem more believable. The play’s focus on failed marriage and the price one pays for choosing the wrong life partner makes the show both compelling, and at times, insightful. Despite my rudimentary understanding of Spanish, the in-seat captions enabled me to understand the play, which was entirely in Spanish. Making a trip to Repertorio Expañol is a bit like taking a trip to another country, as not even the patrons speak English. Seeing a show there is an experience unique from other theaters in New York City.