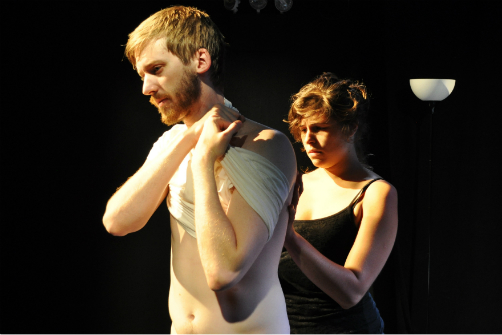 BOTTOM LINE: Mental illness is a tough subject, but with this informative, hilarious, and heart-breaking show we can observe what some people on this earth are suffering from.

Think back to the good 'ol days when life was simple and all you had to think about was passing your high school chemistry class. My favorite days were those of the experiments. Mixing elements together and not knowing the impending reaction (or lack thereof) was quite thrilling. Too much of a substance or a bit of the wrong element and the whole room would be filled with smoke. This Chemistry project definitely makes a loud boom as Jonathan Hopkins and Lauren LaRocca crystallize into brilliant gems. I thoroughly enjoyed the attention to detail utilized by these spot on actors, writer, and director.

Jamie (played by the dedicated Jonathan Hopkins) is a man suffering from unipolar mania. He does not discover this rare mental condition until gouging out sections of his flesh one night after staying awake for days. Forced into sick leave he finds himself at the psychiatrist and encounters another patient, Steph (played by the captivating Lauren LaRocca). Steph has her own history of mental illness and is in a constant battle with depression. She is quite blunt and scares Jamie a bit. Luckily Steph knows the ins and outs of medications, but on occasion as she takes Jamie down this unwanted rabbit hole of mental illness she gets lost herself as the blind leads the blind. The relationship between these two strangely intriguing individuals becomes new territory for both Steph and Jamie as the invitable “I love you” is dealt with, as well as other classic steps in building a life together. With such serious subject matter it is amazing how much comedy is infused into Chemistry. Despite all of the difficult situations there was just as much laughter emitted from the audience as there were tears.

With all aspects considered, this was thoroughly thought through. From each participant, on and off the stage, the production value is a lot higher than shows I have seen with quadruple the ticket cost. Director Anna Strasser even inserted a kiss into a scene change, which I have never seen! That attention to detail is remarkable. None of this would have been possible without writer Jacob Marx Rice who provided the foundation to inspire everyone to go above and beyond a rushed festival atmosphere. Rice has the actors, in the middle of breaking the fourth wall, adding an entirely new plane of possibilities by conversing with each other.

On top of that, the relevancy of the topic of diseases of the mind couldn't come at a more perfect time. The character Steph touches upon the topic of suicide repeatedly throughout the show, which brings up all the recent issues surrounding the late Robin Williams. This informative production certainly brings every element I desire to the table and more. It must have a large viscosity because it is sticking with me. I am recommending it to everyone I know for the entertainment as well as the teachable moments.

(Chemistry plays at 64E4 UNDERGROUND, 64 East 4th Street, through August 22, 2014. The remaining performance is Friday 8/22 at 7PM. Tickets are $18 and are available at fringenyc.org. For more show info visit www.chemistryplay.com.)