Brownie and Lolli Go To Hollywood

Written and Directed by Alycya Miller 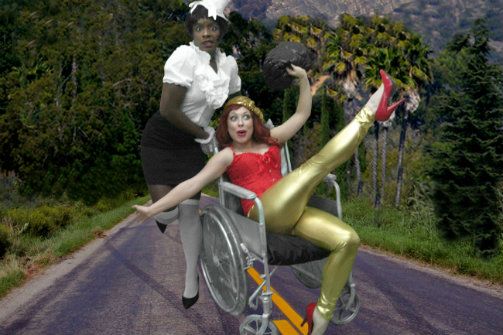 Alycya Miller and Charlie Jhaye in Brownie and Lolli Go to Hollywood.

BOTTOM LINE: This quirky production shows the funny and shocking things these characters will do for fame as they try to find the money to get to Hollywood.

What a strange bird this production is! It puffs up it's feathers and poops weirdness onto your head. The good thing is that New York City is the place for strange. Unfortunately some people enjoy birds, and others do not.

Brownie (Alycya Miller) and Lolli (Charlie Jhaye) are two women working at a hat shop in New Orleans. They regularly tune into a TV show called “Live at Da Fonky Burlesk,” and to their part chagrin, part delight, a performer and her poodle are out of the picture, leaving fifteen thousand dollars for a new act. The problem is, with no money and no transportation, Brownie and Lolli have no way to get to Hollywood for their chance to be D-list stars. Luckily, their boss has checks delivered and they have no qualms about forging her signature.

Where the two lovely ladies run into their big problems are at the check cashing center where Lolli's best friend from high school, Valentine (Janae Camil), is in on a plot to rob the next customers, who just happen to be Brownie and Lolli. Their next stop on the questionable road to stardom is to earn some money at the “Rump Shaker” strip club where Valentine works. That's where they encounter Valentine's twin sister. Trying to earn a job Lolli injures her foot. After that it's to the doctor they go, where they run into Valentine once again as she divulges how she helped her hubby steal their money.

Boris Babaev plays the TV show host, Juan, the doctor-mortician-magician, and The 37 Bandit; with all the costume changes, this show gets a little crazy. It feels like you're watching something that should be animated with anvils and signs that say “boom.” Between the protagonists and the villains, all are written as halfwits, so rather than portraying Abbott and Costello, the characters all contain the emotional range of only Lou Costello's bumbling antics. There are many boob jokes, happy ending jokes, songs about strip clubs, etc.Notice a theme here? I think the sexual jokes are clever, but perhaps there are a few too many for my taste.

There is so much going on in this plot that it gets confusing, but it does have its fun moments nonetheless. (Especially when each female in the cast pushes their breasts together, or up, or simply just looks down at them with a satisfied gaze.) The funky music, written by Darlyne Cain, adds a nice R&B groove, but these actors have a bit of work ahead of them to polish off the piece. That being said, if you enjoy a furrowed brow with a smirk, this show will provide.