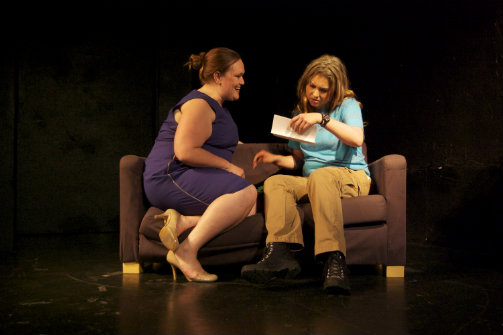 Baby Girl, which runs at this year’s New York International Fringe Festival, is a coming-of-age tale about Ashley, an all-American girl from Florida in search of her identity, first as an adopted child in the 1970s and early 80s, then as a gay, adopted child. The second half of the play is dominated by her very literal quest to find her birth mother.

Playwright Kim Ehly wears two hats with this production. As director of her own work, she gathers a good, energetic cast, beautifully led by the charming and dynamic Christa Meyers as Ashley. And as the author, Ehly has an engaging, often genuinely funny, coming out story to tell, which is dotted by a number of nice touches that carry the ring of truth -- for instance, Ashley as a young girl fantasizing that her adoptive parents selected her in the baby department of J.C. Penney; a note from a boy in middle school asking Ashley to be his girlfriend (“I checked the box marked yes,” she tells us); an attempt at sex with her gay, male best friend, which is precisely as awkward as the time she earlier tries making love to her first boyfriend at age 12. There are also poignant details like the carelessly cruel way in which Ashley’s adoptive mother (exuberantly played by Amy Bizjak) decides to give her the packet of original adoption records, explaining that it’s “one less thing to clutter up the attic.”

However, as both director and playwright, Ehly would do well to let some of her scenes and characters breathe a little more. A few sections are burdened with acting that is unnecessarily heavy on shtick. And a couple of important people in Ashley’s life -- notably a bosom buddy, played by Jessica Farr, and a devoted girlfriend, portrayed by Nori Tecosky -- could be fleshed out more so that we can better feel their significance.

Also, many of the scenes end with an abruptness that is perhaps intended as a cinematic touch but occasionally just comes across as awkward and unsatisfying. And the playwright rushes through several different parts of the search for the identity of Ashley’s birth mother -- through a school yearbook, through a microfiche collection, through the questionably ethical maneuverings of a helpful cop -- that could be mined for more drama if they were allowed to unfold in a more believable fashion.

There is some truly theatrical tension that arises when (minor spoiler alert), the mother is found and Ashley discovers unexpected things about the woman. But even here, there’s something missing: What does this daughter feel about sharing DNA with this particular person? It’s a question that is begging to be explored further, especially after the play’s surprise ending is revealed.