Tickets can be purchased online at www.WomenOfWill.com or by calling TheatreMania at 212-352-3101

Off Broadway, New Play
Runs through 6.2.13
The Gym at Judson, 243 Thompson Street 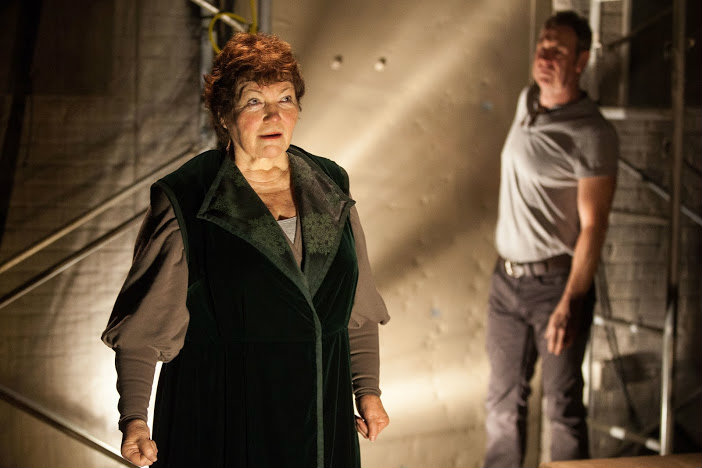 Tina Packer and Nigel Gore in WOMEN OF WILL. Photo by Matthew Murphy.

BOTTOM LINE: Tina Packer leads an evening that charts out the growth and development of Shakespeare’s female characters; it is as educational as it is brilliantly performed, making for a wholly captivating and informative theatrical experience.

An oriental carpet surrounded by taupe cushions, scaffolding strewn with paint cans, and draped construction lights are the meager trappings that create the set for Tina Packer’s Women of Will, now playing in The Gym at Judson’s intimate theatre space. While Valerie Therese Bart’s décor is not prepossessing, it is the perfect metaphor for a play that is all about the structure and construction of Shakespeare’s female characters. The evening is not overdressed, just two actors performing scenes and monologues and casually giving explanations in between, but do not let these simplistic measures deceive — Women of Will is one of the most hypnotic, mesmerizing, and stimulating shows playing in fair NYC, where we lay our scene.

Ms. Packer, the Founding Artistic Director of Shakespeare & Company, also stars in this piece which she has created as an overview of her five-part series devoted to exploring Shakespeare’s women chronologically and charting the development of his Elizabethan feminine perspective — which may not be as outdated as we’d like to think. For those hardcore fans out there, the complete series will be presented in marathon weekends beginning in April, but Women of Will The Overview serves as more of a “greatest hits” collection.

Packer and her castmate Nigel Gore enter the space with the house lights up and immediately launch into a small section of The Taming of the Shrew. The monologue ceases and Packer addresses her audience as a professor might address her students. The evening is a balance of performance and lecture. Although “lecture” may evoke images of stentorian academics droning in a Ben Stein (“Bueller?...Bueller?...”) monotone, Packer and Gore make these moments as accessible and fascinating as the poetry they spout.

Packer explains that “Will” has three meanings: obviously William Shakespeare, but also the Will for power, and Will as an Elizabethan synonym for sexuality. The evening is almost structured like a verbal thesis (the marathon weekends are the full dissertation) where Packer lays out her argument, following each assertion with a performance of the text as her evidentiary support. Considering the wealth of scholarly material on Shakespeare it is hard to imagine that any other materials could carry the weight that her performance does. After all, what better way to example the nuances and growth of the Bard’s text than to witness an expert performance of it?

And what of the performances? When Packer and Gore informally address the audience to provide history, context, and her theories they are engaging and deeply informative without seeming stuffy or overly-intellectual. Yet when they shift to performance-mode they are astounding. Each character portrayed by these seasoned Shakespeareans is distinctly individual and their quicksilver shifts into each persona are brought on by the smallest breath. It is an imperceptible transition and their formidable work looks effortless. Leave it to the Brits to always show us a thing or two about Shakespeare.

While the non-Shakespearean dialogue is carried out sans theatrical affectation, the director Eric Tucker stages the play-sections with a bare bones vision that allows the full-bodied performances to shine through. All the same, Tucker’s touch is apparent and he creates many moments of visual tension — tenderly exampled in Romeo and Juliet’s balcony scene with the simple use of a chair; but never more striking than a Macbeth sequence utilizing flashlights to create the haunting visual of the encroaching darkness swallowing this villainous couple. The evening’s most mesmerizing scene, perhaps, is when Rosalind and Orlando’s mock-courtship (As You Like It) is fused with Desdemona’s murder (Othello). The ferocity of the Othello juxtaposed with the gaiety of As You Like It is unexpected and watching the two actors maneuver between the scenes is chilling and unforgettable.

Whether Packer and Gore are educating or acting they never fail to captivate. Women of Will achieves both of its endeavors — as a scholarly interpretation of Shakespeare’s female characters Packer wins her argument; and as a theatrical event it is a testament to brilliant acting and the durability of this poetry. WoW (an appropriate acronym) is likely to satisfy the most voracious Shakespeare scholar and also serve as a terrific entry point for anyone who has yet to crack open one of his folios. As for me, I will certainly be found at one of those marathon weekends; you can find me one on the edge of my seat.

(Women of Will plays at The Gym at Judson, 243 Thompson Street, at Washington Square South. Performances are Tuesdays at 7PM; Wednesdays through Fridays at 8PM; Saturdays at 2PM and 8PM; and Sundays at 3PM. Tickets are $75. Tickets can be purchased online at www.WomenOfWill.com or by calling TheatreMania at 212-352-3101. There will also be a limited number of $25 student rush tickets available for each performance sold at the Box Office.)