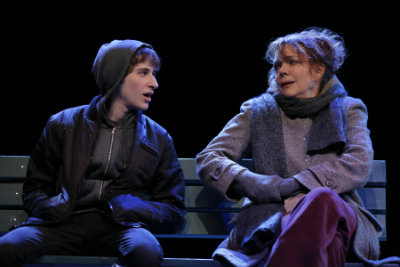 Noan Robbins and Deirdre O'Conell in THE VANDAL. Photo by Joan Marcus.

Actor Hamish Linklater’s time spent costarring on the sitcom The New Adventures of Old Christine must have been influential as his new play at The Flea Theater, The Vandal, has quip-filled, sarcasm-heavy humor that seems like it would be appropriate on the small screen.

The play opens with a middle-aged woman seated on a bus bench in Kingston, New York. She sits in the cold weather with a look of utter misery upon her face. A boy soon approaches and make several unsuccessful attempts to engage her in conversation. Beneath all his dark humor and one-liners we see a seventeen year old boy trying to comprehend the mysteries and secrets surrounding his life and the absence of his mother. Now on the precipice of adulthood, he seeks to understand the sad truths he encounters, turning such tales as suicidal classmates who have affairs with their middle-aged teachers into fodder for jokes. When the boy asks the woman to purchase some beer for him, which she only agrees to do after much strategic cajoling, she encounters the boy’s father who happens to own the nearby liquor store. During her confrontation with the father we learn more about the facts and circumstances surrounding the still mysterious characters. The woman apparently just lost her husband to leukemia, is in dire straits financially, and stole her husband’s nurse’s credit card as an act of “revenge.” The man soon reveals that his son's behavior is repeated.

The twist at the end of the play is both semi-predictable and not one that’s terribly original (it bears a strong resemblance to the twist at the heart of Jeff Daniels’s 2006 play, Apartment 3A.) Nonetheless, the storyline and plot remain entirely compelling and captivating from start to finish. The performances of all three actors are quite strong and they succeed in pulling the audience into their stories. As the teenaged boy, Noah Robbins shows a knack for comedic delivery, one that was surely guided by Jim Simpson's skilled direction. Deidre O’Connor makes her character empathetic despite her sketchy history and not always wise choices, managing to convey a woman with vulnerability and sadness dwelling beneath her deceitfully stoic surface. As the boy's father, Zach Grenier shows a chameleon-like transformation from the television and stage roles he is better known for (he is nearly unrecognizable in comparison to his current regular gig as an arrogant attorney on the television show The Good Wife.) Within The Vandal, playwright Linklater creates characters looking for hope and direction in the face of great loss, and within the worthy hands of this cast his story is one worth delving into.