Off Off Broadway, New Musical
Runs through 7.17.13
The Linney Theatre at the Pershing Square Signature Center, 480 West 42nd Street 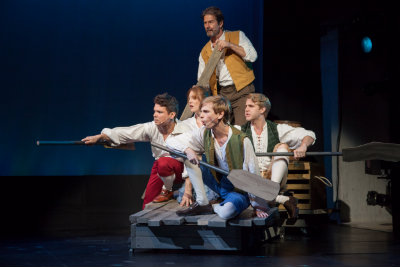 BOTTOM LINE: A strong and realized musical adaptation of a classic story.

Adapting a classic story into a stage show is not straightforward business. What works to create narrative tension in a book won’t necessarily work the same on stage and typically the material of a book is too much to cram into a play in two hours or less. When that show is also a musical, the complications are compounded by the already tricky task of writing effective and plot-propelling songs.

Swiss Family Robinson is John and Patrick Kennedy’s (yes, they’re brothers) take on the classic tale of the Swiss family whose nautical voyage is interrupted by a massive storm that leaves them trapped on a deserted island. The original story provides plenty of rich material and the Kennedy brothers have drawn from that material to create a well-written musical that is funny and entertaining but, more importantly, quite touching.

The Kennedy adaptation takes some liberties with the original plot — this isn’t a verbatim telling of the old story, but rather another stage in the story’s evolution. John and Elizabeth Robinson (Paul DeBoy and Elisa Van Duyne) and their three sons — the optimistic but individualistic Fritz (Sergio Pasquariello), the skeptical but romantic Jack (Matt Mundy), and the prodigal problem-solving youngest son Ernst (Michael Lors) — are forced to settle on a seemingly humanless island after their boat is destroyed in a typhoon. Jack’s skepticism undercuts the overall optimistic and faithful attitude of the family.

Meanwhile, the Frenchmen who the Robinson’s took to be pirates when their ships encountered each other before the storm are also washed up ashore with their captive, Emily (Jessie Shelton), who is disguising herself as a man.

Before the end of the first act, however, both parties are at the mercy of the Hufi, a tribe of women who live on the island and are led by Kiku Mono Hoa (Barbara Tirrell, the boisterous stage madam with Broadway credits).

The live orchestra and large cast carry John Kennedy's songs beautifully with both large ensemble numbers delivered in a chorus of strong and clear voices, and also in some solos and duets.“Wintertime in Switzerland,” sung by the Robinson parents, stands in the first act as a beautiful little folk song, but also as an emotional lynchpin, briefly bringing the homesickness that underlies Elizabeth's positive, faithful attitude to the forefront. Shelton’s solo number as Emily, “It’s Not Like Madagascar,” is also a first act standout as a quirky and charming number.

Costumes by Cheryl McCarron are period-appropriate and beautifully crafted. The hodge-podge rag dresses of the Hufi stand out in their attention to detail. The set by Lewis Folden consists mostly of a few movable pieces of wood that the crew repositions between scenes. Though the minimalism works, it’s easy to imagine this show embodying a more realized world on the stage.

Unfortunately for me, I didn’t get to see the end of the show, as an unexpected conflict forced me to leave at intermission. I can’t speak for the end of Swiss Family Robinson, but all signs indicate an enjoyable musical all the way through. Swiss Family Robinson is refreshingly realized for a festival show and I wouldn’t be surprised to see it emerge again on a New York stage.

(Swiss Family Robinson: A Musical Adventure plays at the Linney Theater at the Pershing Square Signature Signature Center, 480 West 42nd Street, through July 17, 2013. Remaining performances are Saturday, July 13 at 1PM; Sunday, July 14 at 1PM; and Wendesday, July 17 at 9PM. Tickets are $25 and are available at ovationtix.com or by calling 866.811.4111. For more show info visit swissfamilymusical.com.)