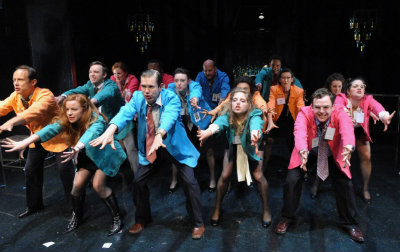 The cast of SERIOUS MONEY. Photo by Stan Barouh.

BOTTOM LINE: A good-looking production of a play that wallows in ugliness, satirizing the world of international finance.

Caryl Churchill’s 1987 play Serious Money belongs to several different eras at once. It takes its form from the 17th century but its storyline from the decade in which it was written, the 1980s. Twenty-six years later, it has taken on another layer: it’s now a period piece, but one that remains so relevant you might almost suspect the playwright was clairvoyant. As far as I know, Churchill isn’t psychic; she’s merely brilliant, and the Potomac Theatre Project’s production of Serious Money reminds us of that fact.

Like most people who majored in theatre after 1990, I’ve read and/or seen quite a few of Churchill’s plays (Cloud 9, Top Girls, Far Away and A Number among them). Her work is always highly political, frequently vulgar and profane, and consistently hilarious. From colonial exploitation to incest, from sexism to totalitarianism, literally nothing is sacred. Serious Money, a satire of the stock market, was a hit when it premiered in London; it subsequently came to New York and ran off Broadway. However, its Broadway transfer was a flop (despite the presence of a young Alec Baldwin in the cast). PTP’s current production first played in NYC last year and has been remounted by popular demand.

The trademark Churchill elements are all here: people behaving badly, razor-sharp dialogue (mostly in rhyming verse -- yes, really), and a deeply cynical worldview tempered with outrageous comedy. A large and talented cast (sixteen actors) assay multiple roles as we follow the exploits of Zac Zackerman (Noah Barlow), an American banker in London, and Scilla Todd (Tara Giordano), an upper-class Brit who has eschewed the family business for the trading floor, side by side with the “oiks,” hungry strivers from the working class newly thriving in Thatcher’s deregulated U.K. Booze, cocaine, and insider information flow freely. Naked, unashamed greed motivates every character, from the posh to the common; you won’t find any heroes, or even anti-heroes, here. Like the plays of Brecht, Serious Money wants you to feel adrift and alienated from the world you’re watching, even while it draws you in with comedy, song and dance. (Each act ends with a gloriously rude musical number, co-written by punk musician Ian Dury.)

There are some alienating aspects of the show that probably aren’t intentional. If, like me, you don’t understand the structure and the lingo of stocks and banking, you will be left scratching your head from time to time. (A glossary in the program and occasional mini-lessons from the characters themselves don’t solve the problem completely.) There is also lots of British slang that zips by in the rapid-fire pace of the dialogue. And while director Cheryl Faraone keeps all the balls in the air and flying with impressive energy, there are times when just a hint of character development would be welcome among all the amoral hijinks. When a major character commits suicide (or is it murder?), the desperation that would drive someone to do so isn’t clearly established. This may be a comedy about people with no ethics, but it still has to connect the dots.

Serious Money boasts nimble performances, excellent design (Hallie Zieselman’s set and Jule Emerson and Krista Duke’s costumes in particular), and a wickedly witty script by one of our most significant living playwrights. At this time of global economic calamity, its depiction of a system run amok is as relevant as it's ever been. If you brush up on your financial vocabulary and leave your squeamishness at home, you’ll enjoy this nasty romp...and then hide your money under the bed.