Off Broadway, Dance
Runs through 6.9.13
The Joyce Theater, 175 Eighth Avenue 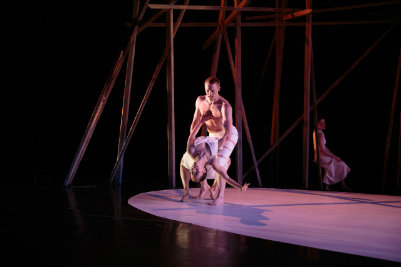 I have seen Rioult perform before, and I am admittedly a fan of Pascal Rioult's intricate choreography. The movement is sometimes sharp and gestural and sometimes smooth and graceful -- the combination of precision and elegence creates a modern dance aesthetic that carries an obvious ballet root, overlayed with unique and interesting differentiation. It's always captivating. And it requires the dancers to exhibit amazing strength and physicality, which is also remarkable to witness.

The company's 2013 program at The Joyce is comprised of four pieces. The first, "Iphigenia," is a world premiere. In it, Jane Sato portrays Iphigenia, a daughter of ancient Greece's tragic House of Atreus. From the beginning of the piece, as Sato playfully prances across the stage with a smile on her face, you have a premonition things might not go so well. Poor Iphigenia's fate is sealed as her father Agamemnon (Brian Flynn) has to sacrifice his daughter against the wishes of his wife Clytemnestra (Marianna Tsartolia) and Iphigenia's fiance Achilles (Jere Hunt). The performances look effortless, and includes a lovely section of guy on guy partnering when King Agamemnon enters. Additionally, the costumes, beautifully draped modern togas designed by Karen Young, provide a timeless connection to an ancient story. "Iphigenia" includes live music performed by Camerata New York. The live accomaniment adds additional drama and theatricality to the performance.

"Prelude to Night" was the second piece of the evening and perhaps the most intriguing of them all. In it, the petit Penelope Gonzalez is a ball of energy against the other dancers, particularly four very tall men. She schizophrenically battles inner demons (maybe dreams?) as she wavers between reality and fiction. At first her hair is in a tight bun upon her head, and later it is loose and in her face, representing her ability to keep it together. One amazing section includes the four tall men grabbing Gonzalez and facilitating various lifts without letting her touch the ground as they pass her back and forth and balance, dip, and transport her across the stage. The sheer strength and control necessary to perform these movements is remarkable. The piece takes great steps to utilize lights and shadows (designed by David Finley) and the result is something eerily intriguing.

The third piece, "On Distant Shores," takes us back to ancient Greece with Helen of Troy. Charis Haines plays Helen, and she possesses strength and grace as she stands above the four Trojan War Heroes: Brian Flynn, Josiah Guitian, Jere Hunt, and Holt Walborn. There is a subdued elegence to this movement, the quietest of the night. This contrasts nicely with the final piece of the evening, "Bolero," which is anything but quiet. Set to Maurice Ravel's composition of the same name, the choreography encompasses Rioult's aesthetic. A continuing stream of movement that never seems to end, the eight dancers perform repetitive gestural movements in a line, and the organization of the movement begins to unravel. Thrown in the mix are slow and steady Adagio movements: arabasques and extensions. The dancers work together in unison and then intentionally not in unision as they perform. By the end of the piece, the music and movement have both built in intensity. It is a satisfying end to the entire evening.

Catch Rioult at The Joyce if you can, and follow their work throughout the year. They are a company worthy of your attention, and their work is suitable for all dance audiences, even those who are new to the art.