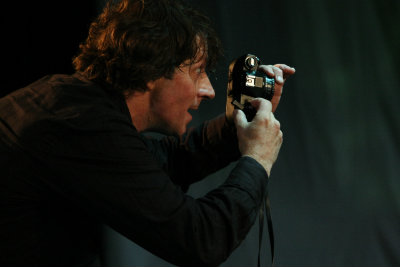 The life of filmmaker Roman Polanski has been so tumultuous that if you wrote a screenplay about it, Hollywood producers would protest it was over the top. Born in 1933, he survived the Holocaust, only to learn that his mother had died at Auschwitz; became internationally famous by directing such films as Knife in the Water and Rosemary’s Baby; lost his wife and unborn child to murder at the hands of the Manson Family; and, in 1977, was arrested on charges of sexual assault against a 13-year-old girl in Los Angeles. Fearing a long prison sentence, Polanski fled the U.S. and has lived in Europe, still making films, ever since. Truth is indeed stranger than fiction.

In Polanski Polanski, being mounted in New York for a third time after brief runs at HERE and soloNOVA, playwright Saviana Stanescu (Aliens with Extraordinary Skills) focuses chiefly on events related to the rape case, but the ghosts of previous traumas make appearances throughout. Grant Neale, as Polanski, takes the audience with him on a journey that begins with a “photo shoot” at the home of his Chinatown star, Jack Nicholson; progresses to sex with a minor; takes Polanski through the California court system and out of the country; and ends (on stage, anyway) with his house arrest in Switzerland, decades after the crime took place. Like its subject, the play has little respect for traditional boundaries, making use of photography, video, and live feed in a way that seems inevitable, considering the subject matter. Neale crosses other lines by interacting with the audience not only verbally, but physically, clambering over knees and diving under seats in search of the champagne Polanski offers his teenage victim to “relax” her. As directed by Tamilla Woodard, he is always in motion, inhabiting every inch of his environment.

As portrayed here, Polanski is a man for whom the past and the present are in constant communication. “The girl” who stands before him today is less a real person than a memory, sometimes a memory within a memory, taking him back to times of joy (his marriage to the late Sharon Tate) and times of fear (Poland during the war). When he exclaims, “My wife is so beautiful,” it’s not clear whether he’s referring to Tate or to Emmanuelle Siegner, the actress he married a decade after his flight to France; the confusion is clearly by design. Neale deftly plays Polanski as a man with a restless mind and a troubled soul, obsessed with images; he is, by turns, brilliant, charming, pretentious and pathetic. He’s also a polyglot, and though the play is chiefly in English, detours into Polish, German, and French remind us of the horrors of Polanski’s youth, as well as his ability to adapt to new and frightening circumstances.

Polanski Polanski is not for the easily discomfited. Watching Polanski’s common sense vying with his desire, and ultimately losing, the audience is in some sense implicated in his crime. Later, trapped in his Swiss chalet awaiting extradition (which, for the record, he avoided), he confronts himself with his victim’s own words, which are straightforward and sexually explicit, in contrast to Polanski’s more poetic description of their encounter. For those who have followed the real-life case, seeing the filmmaker wrestle with his conscience, both before and after the rape, potentially stirs up a jumble of emotions: we are disgusted by his attempts to excuse his behavior, yet we are gratified to hear him acknowledge the pain he caused. (Indeed, the onstage Polanski expresses more remorse than the real-life Polanski ever has, at least publicly.)

Between the misfortunes Roman Polanski endured as an innocent victim and those he brought upon himself, one play could scarcely contain it all, and, wisely, Polanski Polanski doesn’t try. One sometimes wonders whether a bit more is needed in terms of history; if you went to this play not knowing who Sharon Tate was and how she died, Polanski’s references to her would mean nothing to you. The text is clearly designed for a world that already knows “the facts” of the director’s life, and wants to explore not its legal or moral aspects, but the psychology of a man who, despite being both the victim and perpetrator of destructive acts, is driven by an unstoppable need to create. And we, the audience of his films and this play, are the beneficiaries of this relentless urge.