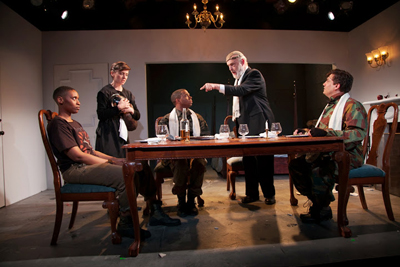 Jen Silverman's Phoebe in Winter is one of those plays that contains so much nuance and color everyone has to be on the same page to reach maximum effect. It is to the credit of director Mike Donahue, and a clearly very smart cast and creative team, that this is accomplished in spades. Even though the script is a quagmire of meaning and complexity, everyone knows exactly what they are doing. And that is really fun for an audience to experience.

Phoebe in Winter is also one of those plays where you're pretty sure you're missing stuff. Because it's so odd, intentionally vague, and convoluted, I know moments and themes went over my head. But that doesn't really matter, because there is so much meaning embedded in the story that it would be impossible not to relate in some way, and it's more about the journey than the destination.

We enter the story with patriarch Da Creedy (Gerry Bamman) and his servant Boggett (Jeanine Serralles) discussing the joy of eating fruit out of season, apparently a rarity these days as we learn that a big war is ravaging the outside world. It seems dystopian, but mostly that's just inferred, as Da Creedy's sons return home one by one. Jeremiah (Christopher Ryan Grant) and Anther (Chris Myers) resume their familial roles while youngest brother Liam (Bobby Moreno) is conspicuously absent. Liam is Boggett's favorite, and she eagerly awaits his return. At this point, an unexpected visitor named Phoebe (Chinasa Ogbuagu) enters the house and proceeds to take her place in a family that is not her own. Phoebe lost her brothers in the war, and although she is on the other side of the battle, she's decided to join this family. Her personal arsenal of weapons means she has a lot of power in her new home.

Turns out she's not really a stranger, and there's a bit of a revenge thing going on. But when Phoebe joins the fam, everyone has to shuffle their roles. Boggett gets relegated to dog, though she's still in charge of the cooking and cleaning. Boggett finally convinces Phoebe to let her be Liam, and when Liam does return, they share the role of youngest brother. After some more juggling, Da Creedy takes Boggett's place, and he's obviously not thrilled about relinquishing his control within the family. Throughout the play, social stations are malleable and up for debate. And every time, it's the ones at the bottom who are most eager for change. No one wants to be the Boggett.

Silverman's absurdist, stylized language allows for a world in which familial relationships are turned upside down. Though never directly commenting on these people, she creates subtle inferences to social and political issues that are impactful without being preachy. You can look at this play as a study of violence, veterans’ issues, women's rights, the culture of war, traditional family values, and a multitude of others. Silverman probably means to comment on all and none at the same time.

The performances in Phoebe in Winter are fantastically weird. There is a noticeable harmony on stage among the cast -- they look like they have been working together for ages though I doubt that's true. Jeanine Serralles, in particular, is a fascinating physical actor. She gives Boggett a presence that makes her utterly human and at the same time quirky enough to feel otherworldly. She communicates the comedy of the piece through every pore.

It's work like this -- unique, distinct, and somewhate experimental -- that makes Clubbed Thumb's Summerworks so essential. This ambitious production, with just a week-long run, includes a feast, several explosions, and three characters taking baths at various times (often with bubbles). What could seem unproducable on the page proves no problem for Clubbed Thumb, and the result is a highly engaging production with a lot of clever artistry behind it.