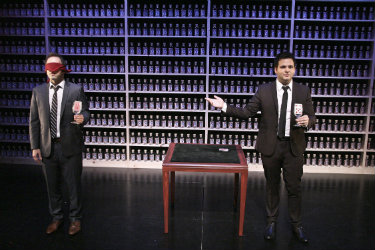 Helder Guimarães & Derek DelGaudio in NOTHING TO HIDE

Nothing is spoken in the first five minutes of Nothing to Hide, a show of illusions now playing at the Signature. Instead, two men sit at a chess table and begin competitively turning over playing cards. One seeks all the reds, one seeks the blacks, and they're both seeking the cards in sequential order from two through Ace. The manner in which each man finds his next card grows more and more impressive: a snap, a grab of the sleeve, a random chaos of never-ending shuffling… that leads to the perfect card.

How do they do it? A good magician never reveals his secret, so essentially we've got seventy minutes of not knowing how they did it. But those seventy minutes are, for the most part, solid entertainment-- especially the evening’s more elaborate and intricate feats. The best one: a segment where an audience member told our hosts the name of her son (it was Drew) and then selected one of 800 bottles from the show’s set (lovely production design by Dave Spafford). Inside the bottle was a card. On the card was written the name Drew. Cue a long ovation well deserved. Another high point: a deck of cards is shuffled over and over, a dozen or so are handed out to random audience members, and DelGaudio perfectly guesses what each audience member holds.

A major drawback is that the space does not allow for the intimacy the show deserves and requires. On many occassions, the front rows oohed and ahhed while the back rows whispered "What's that card say?" Still, under the sure hand of Neil Patrick Harris, Guimarães and DelGaudio are great company who engage with each other and the audience fruitfully. The magic is at times mind-boggling, but it is the creators’ inherent charm that makes Nothing to Hide something to see.