Off Off Broadway, Solo Show
Ran through 7.27.13
The Brick Theater, 579 Metropolitan Avenue, Brooklyn 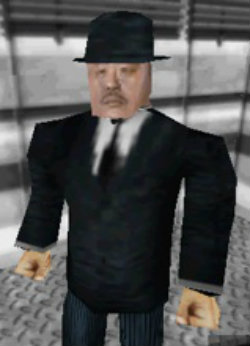 BOTTOM LINE: This video game themed solo show will appeal to gamers; it proves once again that Lawson is a talented performer.

Judging by the content of the two solo shows of David Lawson's that I have seen — VCR Love, which described a fixation with finding sexual arousing material on television and online, and his latest, No Oddjob, which describes an unrelenting obsession with video games — I would assume that he has spent the better part of his life glued to television and computer screens.

No Oddjob bares a striking resemblance VCR Love as both describe a youth spent living outside of reality due to the stimulation of media. While the subject matter of VCR Love was highly relatable — porn and sexuality — No Oddjob focuses on video game references, something that makes it less relatable to audience members who didn’t spend the '90s planted in front of their Nintendo and Sega game systems, eagerly punching game console buttons. However, even when the references fly over the heads of some the audience, Lawson still manages to be engaging through his ceaseless energy and knack for comedic delivery.

Among his video game filled anecdotes is one devoted to his round the clock obsession with playing the James Bond movie tie-in game Golden Eye to the point that its content seeps into his dreams, so that Lawson is playing both while awake and asleep. (The show’s title is a reference to a character in the game.) Keeping in with his previous theme of discovering his blossoming sexuality, Lawson also nurses a sexual obsession with Tomb Raider’s Lara Croft, finding this digital woman more desirable than even live women. Unlike VCR Love, No Oddjob has the inclusion of multimedia, examples of some of Lawson’s favored games, something that helps to make the show more engaging although Lawson’s vivid language already paints a strong picture.

Overall, Lawson once again proves himself to be an unusual and gifted performer whose shows stand out from anyone else’s. No Oddjob most likely will appeal most to seasoned gamers who remember the days of gaming’s past, but there are still more than a few laughs for anyone from any walk of life. If you missed No Oddjob you can still catch Lawson's next show, Public Service, which opens this Friday.

(No Oddjob played at The Brick Theater, 579 Metropolitan Avenue. Lawon's next show is Public Service which plays at Alchemical Theatre Laboratory at 137 14th Street. Performances are Friday August 2nd and Saturday August 3rd 8pm. Tickets are $10 and are available at https://web.ovationtix.com by calling 866.811.4111.)