A Night With Janis Joplin

Written and Directed by Randy Johnson 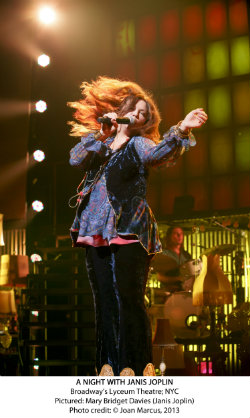 Let's face it, we love a dead celebrity. It could be argued that we like them more once they have passed than when they were alive and well, their mystique only enhanced by the fact that they are not around to answer our questions or debunk our many theories surrounding their life and career. It seems that every few months or so there is a new discovery surrounding Marilyn's death, Diana's love life, or Michael's drug use. These juicy tidbits are dolled out to the public to keep our interests peeked and their estates pulling in the dough. So much so that as each new wave of Lennon fever passes it's hard to imagine there being anything new to tell. I believe I know more about Elvis than I do my own grandfather, and I suspect most of us can say the same. Then there are the dead celebrities that hold our attention because we know so little about them. They died young and often from tragic circumstances, they were extremely yet inexplicably talented, often self-destructive, and despite our endless efforts to get to the bottom of what made them tick they will forever remain somewhat of an enigma.

Case in point, '60s rock star Janis Joplin. She rose to fame as the lead singer of Big Brother and the Holding Company before branching out on her own with a successful touring career and a handful of Top 40 hits. Her death in 1970 at the age of 27 of a heroin overdose, just sixteen days after the death of the also 27-year-old Jimi Hendrix, sealed her fate as one of our dead celebrity obsessions. Sure, her hits live on but it's the young, conflicted, bizarre, addicted woman that we crave to know more about.

The new Janis jukebox musical now playing on Broadway titled quite aptly, A Night With Janis Joplin, does little to shed new light on this eccentric and gifted performer. It is essentially structured as the last concert of Janis Joplin's life and we the theatregoers are treated as rambunctious, possibly stoned fans as we're told to clap, stand, cheer, dance, and sing-a-long. There are a small number of dialogue sections throughout the evening, concert banter that manages to be both brief and rambling as Janis chats with the audience mostly about her love of music and her need to escape her suburban upbringing. There are also a host of other dead -- with the exception of Aretha Franklin -- blues singers that make appearances throughout the concert. These are told to be Janis's musical influences and rang from The Chantels, to Etta James, Bessie Smith, Nina Simone, and the aforementioned Queen of Soul. With an eight-piece band as back-up Janis screams her way through some of her hits and many of her not so popular tunes before finishing with the a cappella "Mercedes Benz" that proves to be the standout number of the evening. Dressed in a 21st century interpretation of 1960s rocker wear (costumes are by Amy Clark), surrounded by lamps both small and large (scenic design by Justin Townsend), and guzzling Southern Comfort, A Night With Janis Joplin is presented as the concert we wish we would have seen, but gives us little of the insider knowledge that we crave.

What does not disappoint is the central performance, given by Mary Bridge Davies who offers an almost unbelievably realistic impersonation of Joplin. She cruises her way through these tunes with a vocal power that Janis wishes she had had, yet manages to also sound as vocally fried as the singer herself. Yes, I feared that her bloody vocal chords were going to fly out mid-number and land in my lap, but at the same time I wanted more. Like watching the ice skaters perform the lifts during the pairs competition. You're scared for them, but totally in awe and unable to look away. Davies is in good company here as all of her castmates are in excellent voice as they embody the great female vocalists of the past. The handful of duets between Janis and her soul sisters provide some of the more touching moments of the show, whether they are through song or simply a withering look across a dimly lit stage.

A Night With Janis Joplin will not go down in history as a great or even good musical. Audiences will not leave the theatre surprised by all they have learned, but as is often the case on Broadway the performance talent is worth the price of admission. Watching Mary Bridget Davies may be as close as we ever come to knowing what it was like being in the presence of this unique and gifted singer's specific kind of magic. If you love, like, or simply respect the musical abilities of one of rock's true female legends, get thee to the theatre because when Davies sings, she is Joplin.

(A Night with Janis Joplin plays at the Lyceum Theatre, 149 West 45th Street, in an open run. Performances are Tuesdays at 7PM; Wednesdays at 2PM and 7PM; Thursdays at 7PM; Fridays at 8PM; Saturdays at 2PM and 8PM; and Sundays at 8PM. Tickets are $49-$140 and are available at telecharge.com or by calling 212-239-6200. For more show information visit anightwithjanisjoplin.com.)