Can be purchased at www.NYMF.org

Life Could Be A Dream

Written and Directed by Roger Bean
Music Direction by Michael Borth; Choreography by Lee Martino
Part of the 2013 New York Musical Theatre Festival
Off Off Broadway, New Musical
Ran through 7.14.13 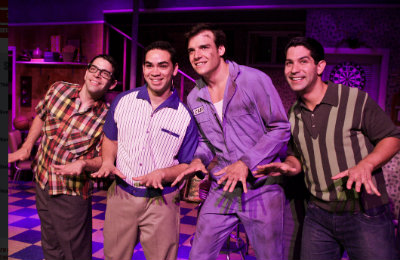 Life Could Be A Dream comes to the 2013 New York Musical Theatre Festival with a reputation. It won the LA Drama Critics Circle and LA Weekly Theatre and Backstage Garland Awards for Outstanding Music, and is an official selection of the NYMF this year. Roger Bean, creator of the long-running Off Broadway hit The Marvelous Wonderettes (which played for 18 months at the Westside Theatre), returns to New York with a charming male quartet. It is a heart-warming musical created around nearly two dozen of the most popular 1950s and 60s tuneful early rock 'n' roll classics. Sugary and nostalgic songs like “Sh-Boom,” “Tears On My Pillow,” “Only You,” and “Unchained Melody” are probably sure-fire wins for the baby boomers in the audience; for me as a gen-X/Y era listener, they are still big charmers, since in today’s world of sampling and collage, we often miss those melodiously moving and heartfelt pieces.

Life Could Be A Dream is about “The Crooning Crabcakes,” a male trio hoping for fame and fortune in the Big Whopper Radio ‘Dream-of-a-Lifetime’ Talent Search. Seeing the upbeat and honest performance of Denny (Daniel Tatar), Eugene (Jim Holdridge), and Wally (Ryan Castellino) will likely put a smile on your face. Holdridge's Eugene stands out lovingly with his challenging high range. The trio becomes a rousing and harmonious quartet when mechanic Skip (Doug Carpenter) later joins as lead singer; Skip has dreamy eyes, a deep vocal range, and the simple yet youthfully sexy 1950s look reminiscent of Marlon Brando’s signature white tank top in A Streetcar Named Desire. The only female character, the quartet’s sponsor’s daughter Lois (Victoria Matlock), has a large role in this performance, but her at times screaming voice is not entirely pleasant.

The storyline is somewhat predictable and spins out of each musical number, and the ending comes abruptly but closes with the lively “Rama Lama Ding Dong.” We are even treated to a remix encore piece accompanied by the fantastic backstage band. Both the choreography (by Lee Martino) and Bean's stage direction are quickly paced and well done. Sadly, the short festival run has finished, but if it returns to the New York stage, I would highly recommend Life Could Be A Dream if you are looking for an easy-going, entertaining evening filled with memorable hits from the early rock 'n' roll era.

(Life Could Be A Dream is part of the 2013 New York Musical Theatre Festival. Life Could Be A Dream closed July 14th, but the NYMF continues through July 28th. Tickets to the festival can be purchased at www.NYMF.org. Membership packages to purchase tickets for multiple shows are also available.)