I Wanna Destroy You

By Joshua Conkel; Directed by Dan Horrigan
Produced by At Hand Theatre

Off Off Broadway, New Play
Runs through 6.1.13
The Beckett Theatre at Theatre Row, 410 West 42nd Street 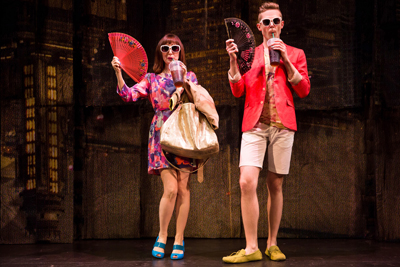 Kathy Searle and Preston Martin in I WANNA DESTROY YOU. Photo by Matthew Murphy.

BOTTOM LINE: A farce about a guy in New York who gets dumped by his boyfriend, treated like a slave by his boss, and to top it all off it’s his 30th birthday.

Ever have a birthday that just absolutely is the worst day ever? I mean, it really, really sucks? Even if you haven’t, you can sympathize with Beau, the central character in I Wanna Destroy You. It isn’t as if people are going out of the way to be mean to him or deliberately ruin his special day, but nobody actually remembers that it is his birthday.

Beau (the adorable Anthony Johnston) works as a personal assistant in New York for Cecile (Geneva Carr, a woman with the never-ending talent for comical voices and facial expressions), a successful romance novelist. She treats Beau as a lackey whom she owns, dragging him all around town and being a “faginizer” (a term coined by playwright Joshua Conkel). We get to enjoy a surprising excerpt from the book Cecile wrote as she reads from her novel (that should be labeled soft-core porn) at a Barnes and Noble book reading. Mick (Kieran Mulcare) is Beau’s southern boyfriend who is breaking up with him to move back to Kentucky. The whole day is complicated by Beau discovering that Cecile’s new wedding planner, Daphne (Kathy Searle), is sleeping with Cecile’s future fourth husband, Hal. If all of those circumstances are not enough for your jaw to drop, wait, there is more. Daphne’s assistant Jim (Preston Martin), or “Slim Jim” as she so affectionately calls him, is a flamboyant gay man whose personality does not mesh well with Beau’s, despite Jim thinking that Beau is attractive. In a partiularly hilarious moment, Beau and Jim trade face slaps back and forth in the middle of the show’s hecticness.

Stereotypes of Bushwick, the Upper East Side, the L train, rats, and many other subjects are mentioned throughout I Wanna Destroy You. Locals will appreciate the jokes more than tourists or those who don't know the city as well. Some of the play's jokes are funny, and some are sort of crass. Beau makes the statement at one point that he is “a broke, ugly faggot.” That illustrates the fine line the show walks. It incorporates real issues of the LGBTQ community, people in poverty, and those living in New York into its humor. The serious references, such as marriage inequality, are only subtle, so as not to bring down the quick and lively pace of the production.

This play is a farce, and farces are known to thrive off of highly improbable situations. The crazier = the better. It was refreshing to be able to spend two hours with the show and simply smile, laugh, and not think about all of the stressors in my life. I’m not sure if I’ll remember this show next year, or even in a couple months, but I am grateful for the chance to relax and appreciate how great it feels to be able to snicker, chuckle, chortle, and guffaw.

(I Wanna Destroy You plays at the Beckett Theatre at Theatre Row, 410 West 42nd Street, through June 1, 2013. Performances are Tuesdays at 7PM; Wednesdays through Fridays at 8PM; Saturdays at 2PM and 8PM; and Sundays at 7PM. Tickets are $18. To purchase tickets visit telecharge.com. For more info visit athandtheatre.com.)