Can be purchased at http://www.NYMF.org

Conceived and Directed by Jason Slavick; Music and Lyrics by Nathan Leigh; Book by Jason Slavick and the Liars & Believers Ensemble
Part of the 2013 New York Musical Theatre Festival
Off Off Broadway, New Musical
Runs through 7.28.13
The Studio Theatre at The Pershing Square Signature Center, 480 West 42nd Street 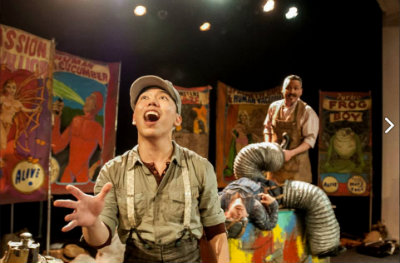 Austin Auh as Icarus, Veronica Barron as Frogboy, and Jonathan Horvath as Daedalus in ICARUS.

Puppets, burlesque, flying machine, monsters and frogboy! This is Icarus, an original musical with a folk-rock score by Nathan Leigh, directed and conceived by Jason Slavick, and book written by Jason Slavick and the Boston-based Liars and Believers Theatre Ensemble.

It is refreshing to hear a musical using a folk vocal style — it adds a personal, down-to-earth tone to this genre. The lively on-stage instrumental ensemble includes the fiddle (performed by Ethan Rubin), the guitar (performed by Jay Mobley) and the accordion (performed by Jenn Bliss, who also performs on flute and other metallic objects). The instrumentation is fitting to the period it depicts. Set in the Depression era, the plot is a touching, human story reminiscent of the bygone days of street performers and traveling entertainers. One of the songs, sung by the troupe’s owner and storyteller Minnie (Aimee Rose Ranger), sings the soul of their struggle: "It’s Eat, or Be Eaten." The festive and energetic opening number, “More is More”, spells out the needs of its people: “Give us more! More music, more booze, more sex, more money...”

The director's note states that during the conception of the piece, writer and director Jason Slavick was interested in the parent-child relationships in the Greek mythology Daedalus and Icarus. At the same time, he wanted to address the conditions of our terrible economy. The result is this, a traveling sideshow story that takes place during the Depression era.

When I was a child I enjoyed looking at old photographs from the 1930s. People’s faces are tense, their eyes stare seriously into the camera; their expression, speaks a thousand words. They seem to be warning us: life is tough, but hold on and treasure every moment — That is what living means! The theme of the struggling troupe, its old timey stunts and puppetry are a nostalgic reminder to us that “Things Could Be So Much Worse.” This song, sung by Lauren Eicher, appropriately applies to our contemporary condition. Eicher plays the role of Penny, a coy and attractive young woman who is the daughter of the troupe’s owner and Icarus’s lover. She sings with a clear voice and also plays as a burlesque dancer/flying machine operator in the troupe’s prized stunt “The Passion Pavilion.” Veronica Barron, who is also a member of the troupe, has few solos but one of her featured songs, “Less Money Also Mo’ Problems,” showcases her extraordinarily warm and deeply felt voice. The main character Icarus (Austin Auh) sings with a lively boyish energy suitable to his character.

On top of a fantastic cast, the most captivating moments of the show are the puppetry performances, designed and directed by Faye Dupras. One especially memorable scene is the puppetry performance of the miniature doll version of Daedalus, Icarus' father. Daedalus (Jonathan Horvath) and the ensemble members perform the neatly handcrafted puppets with attention to detail. They delight and mesmerize the audience. I highly recommend this heartfelt, interdisciplinary musical that is fun, accessible, thought-provoking and beautifully done.