Eager to Lose: A Farce in Burlesque

By Matthew-Lee Erlbach; Directed by Wes Grantom and Portia Krieger 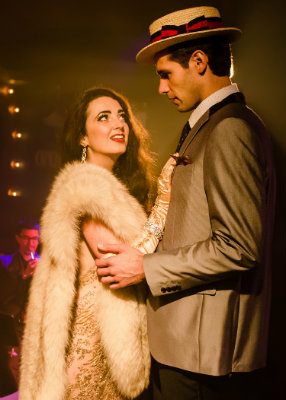 Tansy and John Behlmann in EAGER TO LOSE. Photo by Marielle Solan.

BOTTOM LINE: This show's mix of burlesque dance numbers, comedy, and live music makes it a lot of fun.

Considering how long the revival of burlesque has been thriving in New York City, and its frequent usage for political commentary, it’s surprising that the worlds of theater and burlesque do not intersect more often. I have reviewed a few other fully fleshed out plays that have integrated burlesque numbers, but Eager to Lose is probably the best of these I have seen.

This successful merging of two worlds did not happen overnight; in fact, this show has been two years in the making. After some improvised burlesque performances that resulted from a collaboration between Tansy and directors Krieger and Grantom at The Tank, the trio brought in writer Matthew-Lee Erlbach to give the show structure and entered it into the ANT Fest, Ars Nova’s new talent showcase.

For the run of the show, the Ars Nova venue has been transformed into the burlesque club The Tim Tam Room, which features a stage with a cat walk, cabaret style seating, and a full bar. In the show well-known New York City burlesque star Tansy is the star of this fictional club (she also choreographed all of the show’s dance numbers). At the end of the opening performance Tansy announces that "Friends" star David Schwimmer has offered her her own touring burlesque show and that she will be leaving shortly, leaving two of the other burlesque dancers, Glinda (Emily Walton) and Trixie (Stacey Yen), to take her place. The girls immediately begin the backstabbing, insult hurling, and plotting to gain Tansy’s center position in the club. Moments after she makes her announcement she locks eyes with the dapper MC (John Behlmann), the club’s emcee. MC plots to win over Tansy before she leaves  and enlists the help of his mute friend Peeps (Richard Saudek, who draws much of the show’s laughs with his knack for physical comedy). For whatever reason, Tansy and MC remain unable to confess their feelings face to face.

The show draws much inspiration from Shakespeare’s romantic comedies, particularly Twelfth Night. The actors speak in rhyming verse, love notes end up in the wrong hands and misinterpreted, and characters dress up as the opposite gender. Of course the twists and confusions that ensue are not as intricate or as clever as the Shakespearean works, but the plot works well as a platform to show off some visually stunning burlesque numbers. I would like to see the work stretched out into something more complex with more dance numbers.

This is not Tansy’s first role as an actor--she also was seen in the previously reviewed Pretencion. However, this show is much better suited for the burlesque style and gives Tansy ample opportunity to show off her burlesque skills and pin-up girl good looks (she spent the entirety of Pretencion under a thick layer of clown makeup.) Tansy proves to be more than just a skilled dancer and a pretty face--she also shows a knack for comedy in the show.

Eager to Lose is by no means a particularly cerebral work, but it is definitely a lot of fun. Tansy and her leading man sell their roles, and their talent as performers (along with their good looks) make them enjoyable to watch from start to finish. The live backing band (which interacts with the actors at a few points) also helps to make the show particularly engaging. Costume designer Tilly Grimes also creates visually pleasing vintage-inspired costumes that bring to mind the golden age of burlesque. Eager to Lose makes for a fun night out with its mix of laugh-inducing comedy and seductive, visually pleasing burlesque numbers.