Written and performed by Jude Treder-Wolff; Musical Direction by Wells Hanley
Presented as part of the Midtown International Theatre Festival 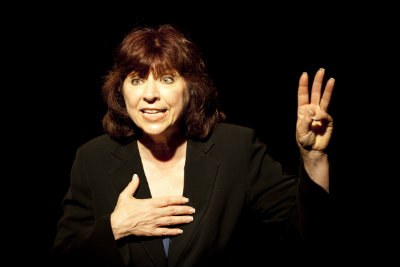 BOTTOM LINE: A short, sweet tale of music, therapy, and delusions, as told by an appealing cabaret performer.

I don’t know Jude Treder-Wolff, but I like her. She’s funny, she can sing, and she seems genuinely kind and caring. How do I know? She displays all those attributes in her solo show, Crazytown: my first psychopath, playing now at the Midtown International Theatre Festival. A hybrid of stand-up comedy routine and cabaret act, Crazytown tells the (allegedly) true story of how Treder-Wolff achieved her own psychological breakthrough as a result of working with wackos.

Our narrator is all alone on stage for slightly longer than an hour (her piano accompaniment comes from offstage), but she embodies multiple characters, including, of course, patients she encounters as an idealistic music therapist at a psychiatric ward in Newark. Treder-Wolff is full of affection for these troubled individuals, as well as for the naïve younger woman she once was. She is particularly funny as a delusional widow who thinks the hospital staff are all waiters. However, the piece also delves into some of the issues that brought Treder-Wolff to her therapeutic work in the first place, among them an uptight Midwestern childhood and a Catholic education. Happily this leads to the best song in the show, “Getting My Hate On” (hint: it involves a nun).

Between her patients’ delusions and her own, Treder-Wolff has a lot of voices to blend together in Crazytown. She does so with good humor and a minimum of fuss. It’s a pleasure to spend time with a talented actress and singer (of a certain age -- and looking great!) who has seen some scary stuff, yet emerged with her sense of humor intact and ready to sing.

(Crazytown: my first psychopath plays at the Jewel Box Theater, 312 West 36th Street between 8th and 9th Avenues, 4th floor, through July 30, 2013. Tickets are $18, $15 for students and seniors. For more information visit midtownfestival.org.)