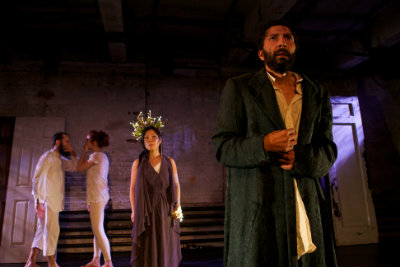 The cast of Blessed Unrest's A CHRISTMAS CAROL. Photo by Alan Roche.

BOTTOM LINE: Performed by an excellent six-person cast, this production is thoroughly theatrical, frequently delightful, and ultimately ambivalent about Dickens’ message of redemption.

Charles Dickens’ A Christmas Carol, arguably his best-known and most-beloved work, has been adapted so many times for the stage and screen that there should by now be a version for every taste. From Lionel Barrymore to the Muppets, legions of performers have taken on the 1843 tale of bitter miser Ebenezer Scrooge. For those who want to revisit this classic and are seeking a more inventive experience, Blessed Unrest is offering an adaptation, featuring a six-person, multi-ethnic cast, that careens from irreverence to solemnity and back again over the course of 90 minutes.

When we first see Scrooge (Damen Scranton), he is shivering in the Christmas Eve cold and scowling at his fellow Londoners, either because they are irritatingly poor, or imbued with holiday spirit, or both. Curiously, he is the only person on stage wearing shoes. The rest of the very skilled cast remains barefoot throughout the action. Scrooge’s shoes set him apart: at first they seem a marker of privilege, but soon they appear more like a burden, a symbol of the heaviness of spirit that prevents him from making emotional connections. Also weighed down by cares is the ghost of Jacob Marley (Joshua Wynter), Scrooge’s business partner and nominal friend, who comes to warn him of the cost of his continued stinginess. In the book, Marley’s ghost is bound with chains, but Blessed Unrest has transformed him somewhat, departing from the text but not from the essence of the story. Their script, penned by Matt Opatrny, hews closely to the original where it matters but focuses and expands on certain elements of Scrooge’s journey, notably his relationship with his deceased sister, Fan (Jessi Blue Gormezano). Scrooge's affection for her, and hers for him, deepens our sympathy for a character who generally works very hard to make us dislike him.

Director Jessica Burr and her design team evoke just enough of Victorian England to remind us of the context in which the story was written but aren’t interested in creating a nineteenth-century time capsule. The actors wear period hats and coats and sing traditional carols but also bust loose in a raucous holiday dance set to Lady Gaga. Cast members play multiple roles, sometimes without regard to gender (or facial hair). The show never stops moving, with all of Scrooge’s past, present and future reconstructed on stage with moving doors, trunks and cases of all sizes, and the actors’ bodies. The ensemble works together as well as any company I’ve seen.

Perhaps this Christmas Carol’s most significant invention is in its rejection of a final catharsis. Dickens gave his book a full-scale “happily-ever-after” ending, but Blessed Unrest, while not actually changing much, injects a note of doubt. It may not be too late for Scrooge to do some good in the world, but will that really undo the damage he has already done? It’s not your Grandma’s Christmas Carol, but there’s room at the table for this one as well.