Off Off Broadway, Play Revival
Runs through 9.22.13
The Gallery Players, 199 14th Street, Brooklyn 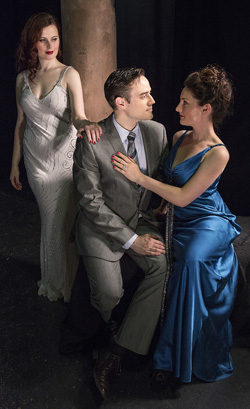 BOTTOM LINE: The Gallery Players have done an excellent job with their revival of this classic play.

Noel Coward is alive and well in Brooklyn in the Gallery Players’ delightful production of Blithe Spirit. Directed by Sue Glausen, the ensemble is comprised of both union and non-union actors to bring to life this classic “improbable farce.”

First seen in the West End of London in 1941, the show played Broadway later the same year and has seen two Broadway revivals. The most recent Broadway revival starred Rupert Everett as Charles Condomine, Angela Lansbury as Madame Arcati, Christine Ebersole as Elvira and Jayne Atkinson as Ruth. A movie was also made in 1945, starring Rex Harrison.

In Blithe Spirit, novelist Charles Condomine (Matt W. Cody) and his wife Ruth (the superb Bonnie Wickeraad) invite the medium Madame Arcati (Noelle McGrath) over for a séance. The plan backfires when the séance awakens the ghost of his first wife Elvira (Amber Nicole Guest). In this production, the strongest actors portray these leading characters. McGrath’s portrayal of the eccentric, slightly crazy Madame Arcati is a comic riot, and the relationships between Condomine and his wives is tense, believable, and terribly funny.

Additional players include Patricia Lavin as Mrs. Bradman, Elliott Mayer as Dr. Bradman, and the funny Amy Scanlon as Edith.

The scenes featuring McGrath as Arcati’s visits are a highlight of the production. Not only does the character provide comic relief, but the four lead actors also have nice chemistry.

Wickeraad as Ruth, the second wife, is excellent. From her Mary Poppins-esque accent to her slow mental and emotional unraveling when Charles first sees the ghost of Elvira, she is an anchor of the production. She commands attention and is very believable as the matriarch of the house as she bosses around her husband.

Cody as Charles believably plays off all of the leading ladies very well. Guest as Elvira is sufficiently ethereal when she first appears, slowly becoming more human the longer she is in the house. She also strikes a nice balance between mischievous and romantic with Cody.

The production is well directed by Glausen. The play moves along swiftly, rarely feeling long. (It clocks in at nearly three hours with two intermissions.)

The scenic design by Olia Rogovoa is quite impressive. She has done an first-rate job creating the living room of this old fashioned well-to-do family. Especially in a play like Blithe Spirit, an excellent scenic design is paramount for us to live in the world of these characters.

The ending of Blithe Spirit is rather difficult to stage, and Gallery Players has done a nice job with the special effects. However, Cody’s performance in the final scenes seems to be lacking, as we did not really see a change in his emotional state with the departure of the ghosts and decision to leave. Additionally, the reveal of Edith’s psychic ability seems rather clunky and could have been staged to better elucidate the situation to the audience.

Overall, the Gallery Players’ production of Blithe Spirit is certainly worth a trip to Park Slope, and can be enjoyed by the whole family.

(Blithe Spirit plays at the Gallery Players Theater at 199 14th Street in Brooklyn, through September 22, 2013. Performances are Thursdays and Fridays at 8PM; Saturdays at 2PM and 8PM; and Sundays at 3PM. Tickets are $14-$18 and are available at OvationTix.com. For more information visit galleryplayers.com.)