Written and Performed by Chiara Montalto; Directed by Ronnie Marmo 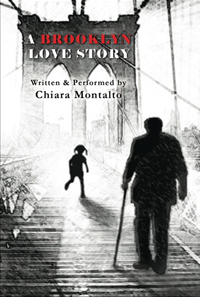 BOTTOM LINE: A tender look at the loving relationship that develops when a 20-something granddaughter moves into the home of her nonagenarian granddad.

When Chiara Montalto was a college student in the mid-1990s, her grandmother died, leaving Pop, her grandfather, alone in his Bensonhurst, Brooklyn home. Montalto promptly moved in, becoming the cook, caretaker and best friend of the then-85-year-old retired City worker. The story of their evolving relationship — which ended in 2005 when Pop, AKA Andrew Struzzieri, passed on — is affectionately recalled in A Brooklyn Love Story. The play has gone through numerous iterations — from staged readings in 2009, to runs at The Cherry Lane Theatre in 2010 and at Los Angeles’ Theatre 68 in 2012. (The show was originally called Emergency Used Candles but the name was changed last year.) The latest version, directed by Ronnie Marmo, showcases Montalto playing both herself and her granddad. The result is humorous and poignant. And while the production is sentimental, it never lapses into the maudlin or sappy.

Instead, the deeply personal tale centers on the everyday interactions that glued Montalto and Struzzieri together. From evenings spent watching Law & Order on TV, to Wednesday evening dinners at the Vegas Diner on 86th Street, to giggling over the antics of neighborhood widows who hoped to entice Struzzieri to remarry, the pair found commonalities that came close to erasing their 65-year age difference. Montalto, a vegetarian, would make elaborate Sunday meals, preparing the meats Pop loved; he, in turn, would keep an eye out for a suitable Italian-American mate for his beloved grandchild. As he saw it, a young woman could not possibly thrive without a husband or partner, so he was always on the look-out for someone appropriate. While Montalto laughed at this assumption, she also noticed that that he had quite a good eye.

In one particularly humorous scene, Montalto sets off her Grandpa’s Life Alert button when she hugs him. Despite calls to the company to explain that the device was activated in error — both Montalto and Struzzieri assured phone operators that there was no healthcare emergency — medical personnel arrived at the home only to have Struzzieri quip that he wanted to rename the Life Alert the “husband button” since the EMS workers were so handsome.

Stage Manager Paula Jessop and Production Stage Manager Denise Castagna have created a spare set, with a chair covered with a hand-crocheted afghan, several small end tables, and a box labeled Emergency Used Candles. The latter, Struzzieri believed, had to be kept within easy reach in case of blackouts or other crises and this simple prop offers a window into his quirky worldview. What’s more, the uncluttered stage allows Montalto to demonstrate her physical acting skills as she morphs between her slow-moving, cane-dependent, granddad and her youthful self.

The transitions are well done and as the vignettes unfold, Montalto exhibits tremendous versatility. The result is a kaleidoscopic array of scenes — we see Montalto sneaking a guy in for a one-night stand, battling a stove fire that filled their dwelling with heavy black smoke, and hosting parties where Struzzieri joined Montalto’s friends to dance and drink the night away — that are filled with angst, joy and levity. At the same time, when Struzzieri becomes sick and subsequently dies, Montalto is left to parse his life and tease out the many lessons he imparted. A Brooklyn Love Story pays homage to this legacy. It’s lovely, touching and sweet. But the play is more than a personal love story; it is also a story about love of place. Kings County is a character writ large in A Brooklyn Love Story, a city where neighbors help each other and where community means something. One leaves the theater wishing not only to toast Pop’s memory, but to lift a glass to the borough that Montalto calls home.

(A Brooklyn Love Story plays at the Manhattan Repertory Theatre, 303 West 42nd Street, 6th Floor, through June 2, 2013. Remaining performance is on Sunday, June 2nd at 7:00 p.m. Tickets are $20 and can be purchased at manhattanrep.com.)