Off Broadway, Play with Music
Runs through 7.21.13
The Clurman Theatre at Theatre Row, 410 West 42nd Street 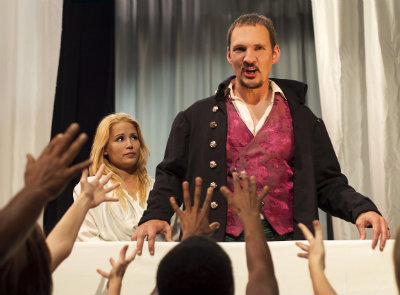 BOTTOM LINE: An ancient Greek drama transforms into a bilingual play with music and energetic dancing.

The production of Alcestis Ascending is a collaboration between the Cuban National Council of Performing Arts, the University of Alabama, and Company HavanaBama, featuring a cast of fifteen Cuban and eight American actors and dancers. It is an adaptation of Greek playwright Euripides' drama Alcestis, infusing modern dance, music and dialogue spoken in both English and Spanish.

It is a rare opportunity to see such a collaboration. According to The Cuban Ministry of Culture, Alcestis Ascending is the first licensed production with both Cuban and American actors to perform in the Big Apple, as most contact with this neighboring country is banned because of U.S. embargoes.

The show is billed as “a rock myth;” knowing Cuba’s rich cultural history and influential traditions, I was immediately intrigued to see some great action and stage energy. It is also one of a handful of Cuban-American plays to perform in this city since the Cuban revolution and Fidel Castro’s rise to power in 1959.

The Cuban dancers perform engaging scenes one after another, and Osnel Delgado's choreography is appealing with the synergy of contemporary and primitive percussive ingredients. The musical score is light with some rock elements — it is a one-man band performance (performed and composed by Tom Wolfe) in a booth above the audience. The cast is comprised of actors and dancers locally and from The Cuban National Office of Scenic Arts. Some of them are film/TV/stage actors and actresses known in their home country. Rayssel Cruz as Hercules displays a charisma that is approachable and funny. Alianne Portuondo as the devoted wife Alcestis takes the stage with poise and dignity. The U.S. cast displays its own magnetic performance with Jeff Horger in the lead role as King Admetus.

Director Seth Panitch (professor of acting at the University of Alabama) and assistant director William Ruiz (teaches at el Instituto Superior de Arte in Cuba) entertain their audience with many comical moments. One does not need to understand the language to understand its jokes. The Cuban cast all does a great job to deliver their lines with dramatic body language and facial expressions.

As the play unfolds and we see main characters interact, one speaking completely in Spanish, the other in English; one wonders why a single language wasn't chosen, perhaps with subtitles, instead of the more challenging bilingual exchange. As the director explained in an interview, the intention is to make it accessible to both audiences. However, an English-speaking audience member who wasn’t familiar with the Athenian drama revealed to me that he had a difficult time following the plot without referring to the program notes.

Despite this dual-language decision, I did enjoy many poignant emotional scenes, such as Alcestis’ refusal to let go of her heart to Hades, and Admetus’ search of Alcestis in the Underworld among ghouls and lost souls. These segments are especially affecting and important in this performance, and I wouldn't mind for them to be explored further or to unfold them more slowly to the audience.

Overall the experience is fun, engaging and humorous with a large pleasing cast of exuberant actors and dancers. It is well worth seeing this ambitious and rare cultural collaboration while they are in town!