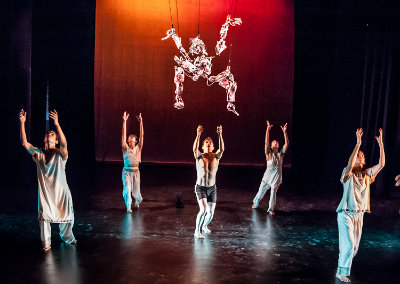 BOTTOM LINE: A beautiful movement and object theatre tale of immigration to America.

As giant puppets swoop in while floor-shaking drumbeats jar and disrupt any lingering outside thoughts, La MaMa’s Ellen Stewart Theatre becomes a transportational vehicle, taking the audience from the known to the unexplored. Brushing off the noise and grime from the gritty East Village, the visual language of Federico Restrepo and Denise Greber’s Urban Odyssey is a stark change from the familiar life carrying on only moments before the theatre lights were extinguished. Like the dancers and puppets that swirl about and above throughout, the audience become immigrants, too, finding their way through the tidily rich landscape of this visually evocative piece.

Underscored by all manner of quirky sound-making instruments (as well as more traditional musical accompaniment), Urban Odyssey explores the American immigration process through dance, movement, and puppetry. Starting from the very beginning with the impetus to leave the motherland, the story winds through to the joyous moment of Edenic harmony found in the New World of America, quickly followed by the ultimate reality check and bubble burst. The piece possesses clarity and precision in spades, and though conveys a certain type of immigrant and certain process of immigration, it hits notes of poignant universality throughout.

A Columbian immigrant himself, Restrepo initially began creating based on his own immigration experience, his own feelings of displacement and forced exploration. That personal and emotional connection that stems from his own story and transition is entirely evident in the work, and Restrepo has finely imbued his dancers (many of whom are immigrants themselves) with this potent, emotive force. The journey is a combination of three separate dance suites, each created over the last decade, culminating in the final epic piece.

Clear and powerful, Restrepo’s imagery is highly conceptual and symbolic. Though, at times, these sharp images become a bit too didactic, especially when coupled with narrative. Indeed, the large-scale puppetry, mask work, and tight choreography so well depict the storyline that the spoken narrative feels slightly unnecessary and cumbersome, when the effective and unique imagery could serve better without it. At one point, Restrepo evokes Juan Valdez, or rather a conflation of him and his donkey, on the one hand a clever and whimsical image, on the other a dismal (if slightly heavy handed) reminder of the clear correlation between migrant worker's working conditions and the lot of pack animals, and this work is done beautifully and very much without the need for verbal communication. Delightfully, too, Restrepo takes some visual potshots at those corporate bigwigs that no country seems rid of at this swell point of globalized commerce.

Overall, Urban Odyssey is a visual treat, though lags at certain moments and hinders its own strength at times with repetitive narrative. The imagery is so strong that spoken text almost seems too plain and undeserving to share the same marley.