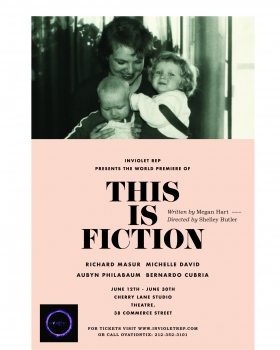 BOTTOM LINE: Sharp dialogue and witty banter make this an enjoyable look at the moral dilemmas of one writer as she attempts to weave elements of her family’s story into her first novel.

Things are looking pretty rosy for Amy Benson (Aubyn Philabaum): A major publishing house wants to produce her first novel and is offering her a contract as well as a hefty advance. The problem is that she’s based the book, fiction though it is, on her real-life family and has yet to tell them.

The play begins on the kind of morning everyone dreads, a day when virtually everything that can go wrong has gone wrong. When we first meet Amy she is cold and wet — she was caught in a rainstorm without an umbrella — and is a nervous, close-to-hysterical wreck. Things take a turn for the better, however, when she takes cover in a coffee shop and meets an affable stranger named Ed (Bernardo Cubria), a high school English teacher. Flirtatious banter leads to more flirtatious banter and before they know it the pair is headed to Ed’s place for what turns into three days and nights in the sack. That is, until Amy panics and flees, leaving Ed feeling angry, betrayed, and confused.

Amy, meanwhile, is obsessed with figuring out how to tell her family about her impending book deal and the details they’ll see in print. She finally boards a bus and heads to their modest New Jersey home, located on the improbably named Perfect Street.

Family tensions run high — dad David (Richard Masur) seems to be battling Alzheimer’s or Parkinson’s and older sister Celia (Michelle David) seems furious that she’s been left to care for their father while her sister presumably lives the high life in Manhattan. But there’s also humor here. Lots of humor, and despite the tensions, lots of love.

That said, when Amy finally tells her kin about the book, and reveals that her deceased mom’s alcoholism is a central component of the tale, tempers flare. To her credit, playwright Hart does not vilify any of her characters. In fact, the anger voiced by Celia and David is both believable and evocative, but so understated that it glides rather than slaps the audience into recognition of their horror and fear. Indeed, they are stunned by Amy’s potential revelations and worry about what the story will say about them and their complicity in the death of a woman they simultaneously adored and resented. Nonetheless, at the end of the day, this is Amy’s story, and Hart makes clear that as a writer, it is hers to tell. Still, the question remains: Can Amy accept the consequences of revealing her family’s personal tragedy, or must she stay forever silent about what actually transpired?

The implications are poignant and This Is Fiction leaves audience members to decide for themselves whether Amy will push forward with the book or leave it on her hard-drive, a testament to the cathartic relief that comes from writing, even if the final product is not shared with anyone. In the end, we know that she will have to live with her father’s words: “Your mom was a wonderful woman. She had problems, but the way you say alcoholic makes it sound like that’s all she was.” His final question — almost a plea — says it all: “It wasn’t all bad, was it baby?”

Throughout the play, Amy’s relationship with Ed provides comic relief. Yes, he’s a complicating factor, but he provides a tumultuous and extremely entertaining element in a story that is full of sass, suggestion, and substantive insight.

Beautifully written, nicely acted, and thought provoking, This is Fiction is a spare, elegant work about a timeless theme. It will leave you wondering about the subjectivity of truth, shaking your head at the possibility of total fabrication.

(This Is Fiction plays at the Cherry Lane Studio Theatre, 38 Commerce Street, through June 30, 2012. Performances are Mondays at 7PM; and Wednesdays through Saturdays at 7PM. Tickets are $19 and can be purchased at ovationtix.com or by calling 866.811.4111. For more show info visit invioletrep.com.)