Son of a Gun

By Chris Cragin and Don Chaffer; Directed by Gabriel Barre 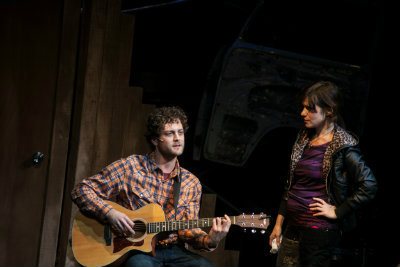 Van Hughes and Rebecca Hart in SON OF A GUN. Photo by Angela Dykshorn.

BOTTOM LINE: This spirited rock musical is rife with appealing musical numbers. Although it only touches lightly on the darker issues it tackles, it remains consistently engaging.

Firebone Theatre’s upbeat musical Son of a Gun tells the story of a family’s tragedies, turning such dark problems as alcoholism, cancer, and miscarriage into fodder for cheery rock numbers. The play opens with Cowboy Jesus (humorously played by Ryan Link) wondering what he should do about a father and son looking to duel. He wonders out loud what sort of family would want to duel one another and the story jumps backwards in time to the beginning. We are introduced to Winston Khrusty and the Appalachian Mourners, a touring family band in which three jovial brothers are led by the grumpy alcoholic dad Winston (Jimmie James) and their well-meaning mother (Lori Fischer, who shows off an impressive vocal range). The eldest son Danderhauler Agagmemnon Khrusty (Van Hughes) is tired of his dad’s tyrannical anger and wants out of the band (a desire he expresses through a rousingly angry rock number). However, when his smoker father is diagnosed with tongue cancer which will render him unable to sing, Danderhauler must take over the band to save his family. Along the way he meets and falls in love with Lucy Sunshine (Rebecca Hart), a cute and edgY rock singer who leads the tour's opening band.

As tragedy after tragedy befalls Danderhauler we watch him slowly fall apart, until he holes himself up in the basement with popcorn and a Netflix account, not wanting to see the light of day. It will take an appearance from Cowboy Jesus himself, as well as his father, in order for him to find his way back to the stage.

Although the storyline for Son of a Gun is a bit silly at times and only touches the surface of the characters for the most part (as is often the case in musicals), the sheer enthusiasm and talent of the performers compensates for this. The performers show themselves to be adept at both acting and music, with all of the instruments played by the actors themselves.

Van Hughes is particularly engaging in his songs, as are Lori Fischer and Rebecca Hart. Hart infuses the character of Lucy with infectious warmth, charm, and energy, making her an appealing performer to watch. While this show explores the depths of its troubled characters's psyches only slightly, it nonetheless will appeal to music lovers who will find themselves clapping and toe tapping along with enthusiasm. Its sold out shows in are certainly a testament to this.