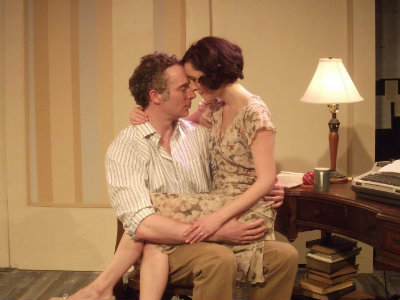 Aidan Redmond and Synge Maher in THE REAL THING.

BOTTOM LINE: The rules of love are examined in this smart, if at times undercrafted, revival of one of Stoppard's best plays.

Tom Stoppard’s 1982 play, The Real Thing, is perhaps one of the most mature love stories of the contemporary theatre. It is also a goldmine for actors in its dealings with the grey areas of honesty, both in love and art. These are reasons the play has won a Tony Award each time it has appeared on Broadway. Stoppard analyzes the great theatrical question that has been probed by geniuses such as Harold Pinter, Noel Coward and Jerry Springer: “Is my partner cheating on me?”

The Real Thing is given another admirable reprisal, produced by Boomerang Theatre Company on stage at the intimate Secret Theatre space in Long Island City . Stoppard’s story of love involves an intellectual game of musical chairs, and the music is largely pop songs from the 1960s. The parable of fact or fiction is laid out metatheatrically right off the bat with the opening “play within a play” scene. In this, we see a sharply written dramatic scene based on the same material of infidelity that will follow in the actual play, or shall I say, “the real thing.” The play is written by Stoppard’s protagonist, Henry (Aidan Redmond). The lead actors are Max (David Nelson) and Charlotte (Valerie Stanford). In real life, Henry’s married to Charlotte and Max is married to another actress, Annie (Synge Maher). Henry and Annie are secretly in love, and split up one marriage to begin a new marriage, and the game continues as Annie may or may not be sleeping with a fellow actor named Billy (Zack Calhoon).

This game of trust, love, deceit and denial are never dealt with as sharply or easily as in Henry’s play. He hates his jealousy and finds it beneath his intelligence, yet ultimately succumbs to it. This is paralleled with his inability to enjoy more “refined” music and he finds himself hopelessly addicted to the common mainstream popular music including the likes of the Supremes and Neil Sedaka. This music is out of date, even for 1982, and Henry also comes to realize his views on sexual exclusiveness in marriage may be just as outdated and unrefined through the help of his free loving daughter Debbie (wonderfully played by Kate Kenney) who lectures that, “Exclusive rights isn’t love, it’s colonization.” All the while, it’s Annie’s devotion to a political radical named Brodie (Douglas B. Giorgis) whose righteousness is proved false -- that brings Henry and Annie to a new understanding. Henry’s belief in true love circles back as The Monkees’ “I’m a Believer” blares into the fading lights.

Director Cailin Heffernan has assembled an extremely suitable ensemble for this off off Broadway revival. Redmond gets Henry’s wit and dry-humor pitch perfectly. However, there are moments where he is almost so wry that we don’t see any of the arrows being thrown at him do any damage. Maher’s Annie is wonderfully complex in her vacillating desires. Overall, Heffernan has an intellectual grasp on this piece, understanding where the important moments are and how to take advantage of Stoppard’s comedic wit. What is lacking at times though is simply drama. Too rarely do we see anyone truly threatened on stage, or anyone’s livelihood at stake. This lack of driving action is coupled with a few technical road bumps in the execution of the production in the form of anachronistic props, inconsistent scenic conventions and clunky transitions. Still, Stoppard’s play ascends all and gets told effectively here. This company's handle of the language and its intentions are all there.

In the end, love wins out. We are then left with the question of defining just what that bloody word means.