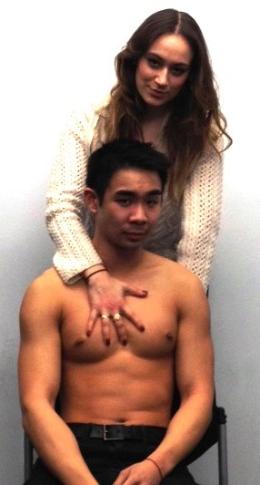 Roger Yeh and Whitney Brown in PRISONER OF LOVE.

BOTTOM LINE: A well-acted, if overly complicated, family drama about one man's life after prison.

When Julian is about to be paroled from prison, he has all the anxieties common to the newly released. Will he be able to adjust to freedom? Will people — especially the three sisters who all but abandoned him while he was inside — be afraid of him?  Will he be a pariah in his small upstate New York hometown?  More importantly, will he be able to adjust to living apart from his boyfriend, Alonso, who is still locked up?

Julian, of course, is not the only one with worries. As Act I opens, his adult siblings are discussing his imminent arrival and debating how best to greet him. Since their mother is in the hospital, they’re on their own and from the start guilt, fear, and competition are in ample supply. Pauline, a femme fatale (played by the excellent Whitney Brown), is the most in-your-face of the sisters. Norma (Tara Lynn Gillfillan) is weepy and self-absorbed and Janice (Jael Golan, whose Israeli accent provides the play’s only casting confusion) is preoccupied with her husband’s political aspirations. All three fear what will happen when their mom passes and speculate about whether she’ll leave them the sizable inheritance they’re hoping for. How will they survive if their brother is named sole heir, they wonder?

As the women wring their hands and bicker, Norma’s boyfriend Kurt (Jamie Geiger), a condescending psychiatrist, and Ralph (Kelly Johnston), Janice’s ultraconservative southern husband, are on-hand as mediators and foils. But once Julian (played perfectly by a vulnerable, if volatile, Roger Yeh) arrives, tensions rapidly escalate. And not for nothing: Julian is visibly tormented, insecure, and angry, and his furniture-throwing tantrums put everyone on edge.

When Kurt — looking to become Julian’s mentor, or perhaps sniffing the scent of the parolee’s enormous trust fund — steps in and offers to be Julian’s on-call therapist, everyone in the house is momentarily relieved, at least until Kurt and Norma break up. Nerves further jangle as the family observes Kurt’s infantilization of their brother; in a matter of days they see Julian regress, becoming childlike and incapable of making decisions on his own. Up to this point, Prisoner of Love is emotionally intense, sparsely written, and provocative.

This changes as the curtain opens on Act II. While the second half of the play retains some of its punch, it teeters close to melodrama and the denouement is overwrought. What’s more, there are too many threads woven into the mix; a story line involving incest is particularly unnecessary. Despite this, as the events behind Julian’s incarceration unfold, the drama offers an engaging look at a believable, if somewhat familiar, scenario.

Prisoner of Love is an ambitious work, touching upon questions of social class as well as loyalty, honor, autonomy, and personal responsibility. They’re important subjects. Nonetheless, when taken together their impact is diluted and the play loses impact by attempting to tackle so many weighty issues at once. In the end, Prisoner of Love would be more powerful if it was stripped of several subplots. Sometimes less really can be more.