By Kevin P. Hale; Directed by John Pieza
Part of the 2012 Frigid Festival 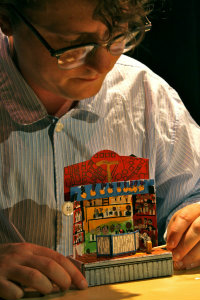 Kevin P. Hale and his magic matchbox in POE-DUNK.

Edgar Allan Poe is a name that tends to come around Halloween. The American literary master is well known for his horror stories and their many stage and film adaptations. As it turns out, Poe was quite prolific in other forms of writing too, and wrote an array of nonfiction essays, satires and humor stories, and made several attempts at completing plays and novels. Kevin P. Hale, the man behind Poe-Dunk: A Matchbox Entertainment, happens to be a Poe aficionado with a deep knowledge of Poe’s lesser-known works, which he shares with his audience in this one-man show.

Hale, who spends the entire show in a striped blue pajama set, is a sort of literary equivalent to Bill Nye (yes, the science guy) and Poe-Dunk is a stunning, kid-friendly (but even more suitable for grownups) matchstick puppet show — I’ll explain — that offers an uncommon lesson on Poe’s body of work. As the show progresses, Hale extracts a series of matchboxes from an oversized book atop his candlelit desk. Each matchbook contains a meticulously designed diorama — a mini-set in which he recreates one of Poe’s stories using characters attached to individual matchsticks. Hale brilliantly utilizes the versatility of the matchbook, and each set slides, unfolds or unfurls in a completely different way from the little box. A live cameraman (Andrew Berardi) zooms in on the scenes, which are thankfully projected on a screen beside Hale’s desk. The set up is smart, as I found my eye bouncing back and forth between Hale’s animated facial expressions and the tiny scenes he manipulated, blown-up on the white screen.

The night I attended, Hale was perfectly on point, speaking in Poe-esque prose and manipulating his boxes and matchsticks with confident precision and only slightly shaky hands. Hale is smart and academic, but unpretentious and accessible, and his show feels as intimate and personal as a bedtime story, as if he’s sharing a part of himself that most people don’t get to see. And he covers a lot of ground, miraculously squeezing over 30 stories into his hour-long show (some, which tend to be Poe's better-known works, make only fleeting appearances).

Poe-Dunk is the kind of show that makes you feel like a kid again while still offering a lesson in something that, unless on the off-chance you are as Poe savvy as Hale, you don’t yet know about. It’s brimming with old-timey charm with its handcrafted, shoe-string budget puppets and Hale infuses his storytelling with a passion that is infectious. Poe-Dunk is a gorgeous and lighthearted show and a good choice for anyone looking for some educational fun in the Frigid fest.

(Poe-Dunk: A Matchbox Entertainment plays as part of the Frigid Festival at the Red Room, 85 East 4th Street, through March 3, 2012. Remaining performances are Wednesday, February 29th at 11PM; and Saturday, March 3rd at 12:30PM. Tickets are $12 and can be purchased by visiting smarttix.com or by calling 212.868.4444. For more festival or show information visit frigidnewyork.info.)