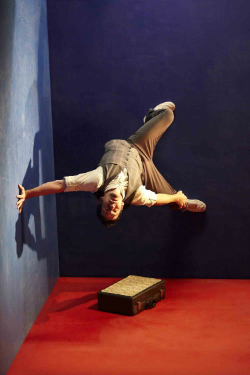 BOTTOM LINE: A short one-hour piece of physical theatre that cleverly recreates a world with horizontal gravity – its simplicity, creativity and timing should keep you engaged throughout.

What would you do if while seated in a room, you discovered you could suddenly defy gravity with no more than a kick off the ground? I would probably end up doing something silly like can-can off the walls or float to the ceiling in a breast crawl motion. But, if you’re talented and gifted like Tobias Wenger, sole performer and acrobat extraordinaire in LEO, then the possibilities are seemingly endless.

LEO, a production from the German company Circle of Eleven, is a delightfully creative and original piece of theatre, which combines projected footage and live physical performance. Enhanced by some nifty optical trickery, LEO presents two realities side by side, one of which shows our main protagonist interacting with a form of gravity which is seemingly rotated by 90 degrees. On the right side of the stage is an empty boxed room, with a few blue walls and a red floor. Nothing unusual about the place except that it is rotated by 90 degrees – that means that the red floor is on the side of the room and in order to stand on that floor, Wenger has to lay flat and place his feet on the side of the box (this is just as hard for me to explain as it is for you to understand). To the left of the stage we see live filmed footage of Wenger, only that the image is rotated by 90 degrees, so while Wenger is lying on the floor on the right, the image would show him standing up straight (oh, just go see it). The result is some gob-smacking footage of Wenger performing impossible acrobatics off the walls and ceiling that will have you stunned and amused, even though you are perfectly aware of the causality. It’s like seeing a magician and knowing his tricks, but still being amazed at the illusion.

There is no speech in this performance, other than the odd “hello” which Wenger utters as he is trying to discover what’s behind the loss of gravity in his new room. And yet, the music is so well selected and the performance so meaningful, that you’ll be perfectly aware of the changes of emotions our hero undergoes while exploring his new power. It starts with confusion at discovery, then goes on to curiosity, excitement, solitude and finally a desire to escape to an unknown freedom outside of the room. The music runs the gamut of styles: classical, modern, disco, folksy, and it’s hilarious to see Wenger dancing on the walls to these different rhythms. The music also successfully sets the ambience required to accentuate the change of emotions Wenger undergoes in the boxed room.

Another accomplishment of this piece is the timing. As you start to tire of a particular set of tricks, Wenger changes to something different, surprising you with new props, moving on virtual objects drawn on to the wall with chalk and even interacting with computer graphics only visible on the screen. These new stimuli are gratefully received, as at times this piece can seem like an extended circus act (Wenger actually comes from circus training). The show lasts a little over an hour –although on the short side, any longer would have made it tedious. It would have also meant our protagonist Wenger would likely need prosthetics before he was 40.

If you’re looking to expand your perspective and experiment with new types of theatre, this piece is worth a watch if only for its sheer personality and creativity. Of course, it comes at a price tag ($48.50 for a one-hour show is not cheap) although judging by the smiles as I left the room, you may find the investment rewarding.