By Sidney Goldfarb; Directed by Paul Zimet
Produced by The Talking Band 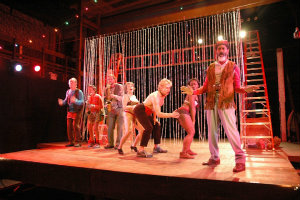 BOTTOM LINE: A seedy sex show on a mission to find Jesus, then sell him up and down the Bible Belt, in this jam-packed evening of dingy goodness.

Sex and Religion have rarely failed to be intertwined throughout the course of history, generally with Religion muddying its little hands, attempting frantically to dictate the sexual practices of others. But when Sex decides to jockey and ride Religion for a change, who wins? The Talking Band brings their take on Sex riding the Religious swell in Sidney Goldfarb’s, Hot Lunch Apostles, now playing at La MaMa’s Ellen Stewart Theatre.

When a touring sex show / side show has hit the skids with tough times throughout the country and unemployment soaring, pimp-cum-ringmaster, Barney (Loudon Wainwright), decides that the key to scoring big through the Bible Belt is to start presenting family-friendly, religious themed shows, featuring the story of Christ from immaculate conception to his eventual return from the dead. While they rehearse the new bits, though, touring remains down and dirty as usual, with strip shows and hot lunches (not in the classical sense and if you don’t know, you don’t want to know, but it involves eating), spread through less god-fearing towns. But as rehearsals for their Christ takes become more nuanced and authentic, the regular sex show business becomes more complicated, leaving the group ideologically pinioned somewhere between their upcoming Last Supper and their last hot lunch.

First presented by the Talking Band in 1983, Goldfarb’s play captures our contemporary state of affairs with uncanny precision. Just as we’ve seen of late, as the pink slips piled up through the last couple of years, parts of America frantically exchanged grips on jobs with grips on bibles, faithfully replacing one boss for another. Indeed Barney’s sentiment, “Jesus freaks used to be a joke. Now they run the country,” is one that continues to grace the pages of the latest New York Times, albeit a bit more articulately.

Reacting to this phenomenon with the great American mentality of entrepreneurship, the hodge-podge, aging group of Hot Lunch Apostles decide to make a buck off religion while they still can, even if it means putting robes on for a change and exchanging their money-shots for miracles. But the play begins to get murky when Religion starts to win over this team of tried and true ne’er-do-wells. As their true ambitions of desiring the straight and narrow begin to bubble up over the glitter and grease, an inescapable rift is placed between those who can still remember that they’re still just turning tricks, and those who have turned to God. While it may be true, as Barney declares, that this Jesus stuff is better to have in his head than what he had before (which was absolutely nothin’), a sudden, odd cloud of religious indoctrination passes over the stage. It was all fun and games until someone started believing. Even when one doubting apostle pipes up and preaches that what they’re presenting now is worse than their flesh shows could ever be because people believe in them, the play has inextricably wandered into a hazy bog of religious arguments, not to return. But it remains entangled with enough tassled-bras and banana-hammocks to keept things interesting.

What’s safe to say is that this clunky cultural mash-up is delightfully low-tech, gritty, and often shocking. The naked bodies on stage are not all young but are no less captivating and even when the script pulls toward didacticism, the passionate belief in the work the performers exude is enough to keep the show on track. As much as the carnival mentality that begins in the lobby prior to the actual performance, if sustained, would have made for a delightful time, the plummet towards questioning beliefs and practicality completes the evening, and makes the entire affair richer and apt for continued conversation.