The Fall to Earth 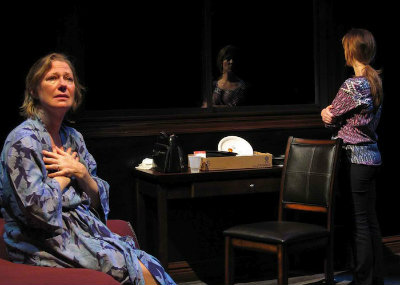 Deborah Hedwall and Jolie Curtsinger in The Fall to Earth. Photo by John Quilty.

BOTTOM LINE: A brilliantly written and constructed play dealing with issues of suicide and family dysfunction.

Daughters’ impatient appraisals of their mothers may be expressed in a simple rolling of their eyes. “Can you believe what she just said?” Mothers are clueless, they just don’t get it, and it is remarkable that they even manage to survive in the modern world. And mothers’ attitudes toward their daughters? Often not much better. Daughters are unappreciative, unaware of the sacrifices their parents made for them, and living in some high-tech dystopia disconnected from traditional values.  “After all I did for her, this is the thanks I get.”

In the opening minutes of Joel Drake Johnson’s terrific play, The Fall to Earth, now playing at 59E59 Theaters, we are treated to a quintessential manifestation of that mother-daughter dynamic. Fay Schorsch (Deborah Hedwall) and her adult daughter Rachel Browney (Jolie Curtsinger) have just checked in to a run-of-the-mill motel.  Fay, a low class, loquacious, unsophisticated, parochial, fiftyish matron, lives with her couch potato husband (a Vietnam War veteran and Rachel’s father) in a world of home cooked meals and land lines. Rachel, on the other hand, is a successful, well-traveled, thirtyish, divorced single mother and business woman, now residing in Chicago and completely comfortable in today’s more modern world of restaurants, room service, frequent-flyer miles and cell phones.

Fay is quite taken with the size of their room and the size of the king size bed they will have to share, the motel having mis-handled their reservation and having failed to provide the separate beds that Rachel had requested. Fay is also impressed with the view of trees and mountains beyond the parking lot, with the writing desk in their room and the motel’s lovely stationery, with their rental car’s unlimited mileage, and with having flown business class and having being catered to by the airline’s flight attendant en route. Rachel could not be more blasé about it all and would have much preferred separate beds. What is of great import to her mother is mundane and trivial to her. In short, this mother-daughter outing would appear to have all the earmarks of a typical dysfunctional mother-daughter experience.

But there is much more to this play than first meets the eye. Fay and Rachel are not just seeking to bond through some shared “girls’ night out” experience. On the contrary, they are engaged in fulfilling the unpleasant duty of identifying and claiming the body of Kenny, Fay’s son and Rachel’s brother who, as we quickly learn, committed suicide. As the play unfolds, we learn a great deal more - not just about Kenny's death, but about the relationships between Kenny, Fay, Rachel, and Kenny's absent father.

In addition to Fay and Rachel, there is just one other character in the play. Terry Reed (Amelia Campbell), the police officer who found Kenny’s body, attempts to assist Fay and Rachel in coming to terms with his death, and has issues of her own which may or may not cast some light on what has transpired.

Johnson has constructed an intricate, intelligent play that captures your attention at the outset and never lets go. His ear for dialogue is first-rate. Curtsinger (who is also the co-founder of InProximity Theatre Company, the company presenting this New York City premiere) does an absolutely brilliant job in her role as Rachel. And Hedwall is just incredible in the multi-faceted role of Fay.