By JD Cannady; Music and Lyrics by Zack Powell; Directed by JD Cannady
Produced by RIFF Collective
Part of the 2012 Frigid Festival 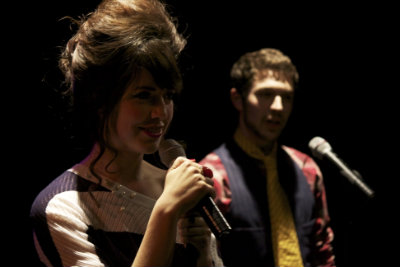 BOTTOM LINE: Hamlet's deceased girlfriend rocks the afterlife, hoping to pick up where they left off back in Denmark.

Doing a production of a Shakespeare play is difficult enough. Adapting one of his plays into a new work is even trickier. One advantage of doing so is instant familiarity: unless you choose Pericles or King John, you can assume much of the audience will already know the story, allowing you to focus on other, non-plot-related matters. However, there’s a huge disadvantage: your new work will inevitably be compared to, well, the old work, which in most cases is going to be a million times better than anything you do (unless, perhaps, you’re Tom Stoppard or Jerome Robbins).

Drowning Ophelia is a rock-musical sequel to Hamlet that puts the unfortunate Danish lass in Purgatory (following her watery death), where for four hundred years she has been fronting a rock band, boozing, sleeping around, and waiting to be reunited with her melancholy Prince. Tonight she expects him to come catch her gig, so the time is ripe for reliving the past. Ophelia is re-imagined here as a boy-crazy middle-class bad girl, rather than the obedient but conflicted maiden of Shakespeare. Her band mates (named Feste, Puck and Touchstone in a nod to some of the Bard’s most beloved comedies) take turns acting out characters from the past: Laertes is a stoner, Polonius a harried company man, and Gertrude a self-involved ice queen. Hamlet appears both in flashback and, at last, in the Purgatorial present, and needless to say, the reunion isn’t exactly what Ophelia was hoping for.

Somewhat ironically, Mickey O’Sullivan, who plays Hamlet, gives Drowning Ophelia’s standout performance: he does a great job both with Shakespeare’s poetry and the comedic elements of the modern-day text. The overwhelming impression I got from the rest of the cast was that they seemed incredibly young, and when I looked in the program and realized that most of them are current university undergrads, I understood why. There are some moments of insight in the script and some flashes of originality in the music, and what the show needs now is a clearer aesthetic. We’re watching a girl who drowned after having a nervous breakdown because her lover killed her father: if she’s gonna rock, she needs to rock a lot harder.