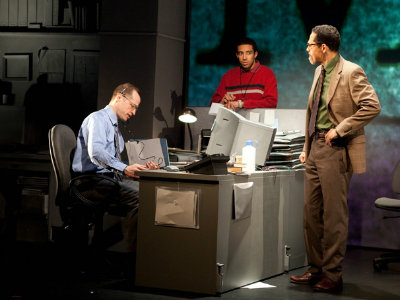 BOTTOM LINE: A quick-paced fictional account of the Jayson Blair scandal at the New York Times, which inspires with some memorable acting and a sharp and witty script.

In 2003 Jayson Blair, a young, talented reporter at The New York Times, resigned amidst a scandal of plagiarism and fabrication, dealing a powerful blow to one of the world’s beacons of journalism. The fact that he was African-American brought racial tensions into the argument, as some at the office claimed that the policies of affirmative action were more responsible for his permanent hiring that any merits during his internship. A front page story released by the Times on the scandal described the occurrences as “a low-point in the 152-year history of the newspaper.”

CQ/CX is a fictional account of the episode written by Gabe McKinley, who actually worked at the Times’ news desk during the scandal. He presents Jay Bennett (Kobi Libii) as a passionate and prolific black intern who has entered the paper through one of its diversity programs. Driven, resourceful and ambitious, he is soon offered a permanent position there against the recommendation of his direct editor who is not happy with the large amount of corrections Bennett’s work has required during that period. Taken under the wing of the managing director Gerald Haynes (Peter Jay Fernandez), who is also African-American, Jay is rapidly promoted to cover national news before the ensuing scandal erupts.

Simply put, CQ/CX is a delightful and truly riveting production. It keeps a rapid pace from the beginning, both in terms of the lightning-fast scene changes as well as in the darting dialogue, a reflection of the dynamic and high stress environment at Old Gray Lady. This leads to the familiar “West Wing” effect, where you’re completely transfixed to what’s going on and afraid to even blink in case you miss something of relevance (you know exactly what I mean). The story focuses on the exchanges between the main characters, and is upheld by a witty and sharp script, to the merit of McKinley. The acting in this piece is also wonderful, which is not surprising given the star studded cast. Tony nominee David Pittu plays Junior, whose family owns the paper, and Fernandez and Arliss Howard (who plays Hal Martin) complete the paper’s management team. While Libii generally does a fine job playing the deceitful and ambitious Bennett, I felt his acting could at times be a little inconsistent, especially during some of the high tension moments.

If I had to list my 5 favourite things to do on a lazy weekend, reading The New York Times would definitely have a prominent place on that list. However, I’ve never really stopped to think what working at one of the world’s most famous papers would actually be like, and it’s precisely this portrayal of life inside the paper that I enjoyed the most about CQ/CX. The unrelenting pace, stress and pressures of working with a publication deadline seem to be balanced out by the existence of the journalistic ideal of serving the need for high quality news. And this ideal is elevated to its highest rank at  The New York Times, where each employee seems to be acutely aware of being part of something special, as if serving a higher order mission for the betterment of humanity. “We are the first thing the President of the United States reads every morning,” says Junior to his employees with pride. The weight this responsibility entails is played out many times in the play, and is especially apparent during the multiple late night bourbon-infused manager meetings, where they take it in turns to describe both their love for the paper and the personal sacrifices they have had to make for it, a price it seems, our protagonists were willing to pay. And it is within this context that one can understand to a better extent the impact of such a scandal as the one Bennett arouses.

CQ/CX is a truly entertaining drama -- an intriguing, deep and riveting piece that is well worth the similarly impressive price tag. Oh, and in case you’re curious, CX is an editor’s mark for “correction”, where as CQ, which is from the Latin cadit quaestio, literally means that the question falls, or rather that a particular fact has been validated and hence the question is resolved. And now you can scratch a “CQ” into the margin once you’ve decided whether you’ll go and watch this or not. And make sure it’s a no yes (CX).