Based on the novel by Kate Chopin; Adapted and conceived by Bryce Norbitz and Nicole Rosner; Directed by Nicole Rosner 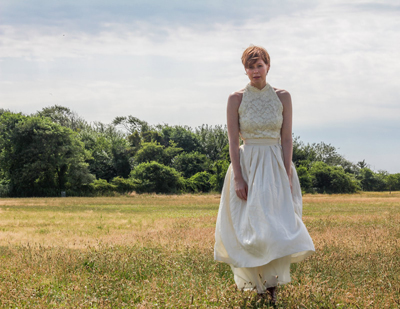 Meghan E. Jones in THE AWAKENING. Photo by Michael Bernstein.

BOTTOM LINE: A beautiful adaptation of a classic story with a feminist emphasis.

I’m a little bit infatuated with UglyRhino and I don’t care if they know it. In July I attended their monthly event, Tiny Rhino, which combines a short play festival with a drinking game. And this week I experienced The Awakening, part of their Micro Season, which plays at The Brooklyn Lyceum through September 8th. There is something about this young company’s grasp of artistry and commitment to community that I appreciate so much.

The Awakening is an adaptation of Kate Chopin’s late-19th century novel. Deemed too daring for its time, its exploration of its main character’s inner desires is a call to female individuality. In this stage version, Meghan E. Jones plays Edna Pontellier, the wife and mother of a respectable family who is yearning to break away from her mundane existence. There are sparks of Ibsen’s A Doll’s House in this story, as a kept woman discovers the identity that she is able to seek regardless of society’s rules. Just as A Doll’s House’s Nora is self-driven despite her responsibilities as a mother and wife, Edna is similarly on a personal path, prior commitments taking a back seat to her journey...or, you know, her “awakening.”

To frame the story, playwrights Bryce Norbitz and Nicole Rosner have included Kate Chopin as a character. Played by Leighton Bryan, she sits in a study perched above the action, watching things unfold and often narrating. Because the story’s prose is so beautifully written, it’s a nice touch to have much of it retained -- and to then have it more or less read aloud by the author herself. We are aware of the literary importance of the piece this way without being distracted from the live action occurring between the characters. And in a way, Bryan’s performance mirrors Jones’s -- both women seem to be uncovering something amazing within themselves.

The Brooklyn Lyceum offers interesting architecture for this production with a built-in mezzanine level spanning the back wall and allowing for bi-level staging with staircases down either side. Our eyes dart back and forth between the action and Rosner (as director) meticulously guides our awareness throughout the piece. If the Lyceum allowed for a more intricate lighting plot, I can only imagine how much cooler this conceit could be.

Another nice touch is the inclusion of live music, composed by Gisela Fulla-Silvestre. Many of the performers play instruments and wander from the “pit” to their respective scenes throughout the show. Although the show is not a musical, there is a bit of singing, and this addition of music adds to the convivial nature of the story’s circumstances which eventually become a dichotomy to the story’s less optimistic end.

The Awakening is well cast and well acted, with Jones standing out as the internally conflicted, passionate protagonist. Giving a nuanced performance that never drags, Jones gets to a raw place that teeters on the edge of sanity. Her skillful performance is really thrilling to watch.

Fans of the literary world will especially rejoice in this production, which gives credit to its source material in the most respectful of ways. The Awakening is a compelling story, and one that is remarkable to see staged as a play. UglyRhino does a first rate job with this creative interpretation.

(The Awakening plays in rep at The Brooklyn Lyceum, 227 4th Avenue near Union Street, Brooklyn, through September 8, 2012. Performances are Wednesdays through Fridays at 8PM and are followed by a production of GLAMDROMEDA. Tickets are $18 and include 2 free curated cocktails. To purchase tickets visit uglyrhinonyc.com.)