Tickets are $25 and are available at organsofstate.org. 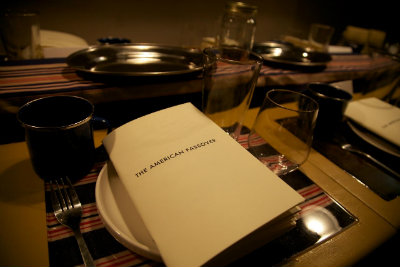 As New York boasts the largest Jewish population in the country, the holidays and rituals involved in practicing the religion take on a greater, shared meaning in the context of the city, where even those of other religious denominations become familiar. This fact partly inspired the Organs of State’s production of Americana Passover, a ritual, theatrical dinner that mixes actors and audience members together to recreate the ritual of Passover to be reflective of our current political, economic, and cultural climate, exploring what it means to be American.

The audience/dinner guests are seated alongside the members of the cast at a long dinner table, and the actors do not identify themselves as the performers and try to pass themselves off as fellow diners, although eventually it becomes easy to pick them out as they behave quite actor-ly. The one exception is Samantha Galzara, who serves as a leader of the dinner, seating herself at the end of the table. Paul Ashey serves as the friendly everyman for diners who are going solo or might be seated apart from their companions, passing himself off as a guest who decided to attend alone. Cyrus Soliman plays the sarcastic, disgruntled dinner guest, making snide remarks when the pace of the ritual is thrown off. Kelsey Bramson plays the young, artistic, brash dinner guest, making such bold suggestions as moving the ritual dinner to the bar instead of around the “sacred” table. The guests are, for the most part, not introduced to one another, although the beginning of the event gives enough time for you to chat with those seated next to you. My dinner companion, Claire, seemed to be a performer based upon her unusual line of discussion and questioning, though she wasn’t listed on the program, so perhaps she was just very caught up in the spirit of the event. We discussed such unusual topics as life purpose, whether or not we wanted to have children, our purpose for being in New York City, and our vision of the future.

All of the diners then took part in the ritual which involved reading rounds, poems, and stories all about our current economic and political climate, addressing such topics as the recession, the cynicism towards America and the election. The dinner used a number of reworked rituals centered around pop culture and political themes, such as having one diner toss coins over her shoulder for Facebook founder Eduardo Saverin, who renounced his American citizenship to live in Singapore with his fortune. “You can no longer access the American invention, Facebook./For that we pity you./We invite you to the table,” the diners read.

The food (how strange to be reviewing food in the context of a theater review) was a delicious reimaging of traditional American cuisine of yore: blueberry buttermilk biscuits, baked spaghetti squash with bacon, chicken with baked garlic, mashed potatoes, and quiche with apples, cheddar, and butter beans. Sara Lyons works as a server, decked out in a Lady Liberty-style costume. At one point Lyons drops her duties and joins in the ritual and gives a moving, heartfelt performance of Langston Hughes’s poem “Let America Be America Again.”

In general, I am usually not very comfortable with audience participation in theatrical productions, unless my participation requires little more than a laugh. In this dinner actors blend in with the dinner guests and they guide the dinner and conversations into set directions. I felt uncomfortable having dinner guests who were clearly actors playing roles speak to me while pretending to be guests and not, in fact, part of the show. I also felt uncomfortable performing in front of total strangers who made me feel self-conscious. However, it could be amusing for some more outgoing diners, particularly if they bring plenty of friends with them. As someone who is not Jewish (neither in terms of religion or descent), the ritual of Passover is not something I am entirely familiar with, so the play’s spin on these age-old traditions was not immediately clear to me.

Among the most captivating of the night’s events were the topics of conversation I found myself discussing with my seat mate. As a New Yorker, I often keep my walls up and avoid interactions with strangers at all costs. Sharing deep, personal details with a random stranger that circumvented all polite chitchat felt like a cathartic way to spend an evening. The reimagining of the ritual of Passover seems like something that could also perhaps be linked this month to Thanksgiving, a holiday that unifies all Americans regardless of creed or ethnicity, and surely would be an opportunity to also revisit the currently flawed state of our country.

(Americana Passover plays at Two Moons Art House and Cafe, 315 4th Avenue, through November 11, 2012. Remaining performances are Thursday at 8PM and Sunday at 8PM. Tickets are $25 and are available at organsofstate.org.)