or in person at the HERE box office from 5 PM until curtain on show days. 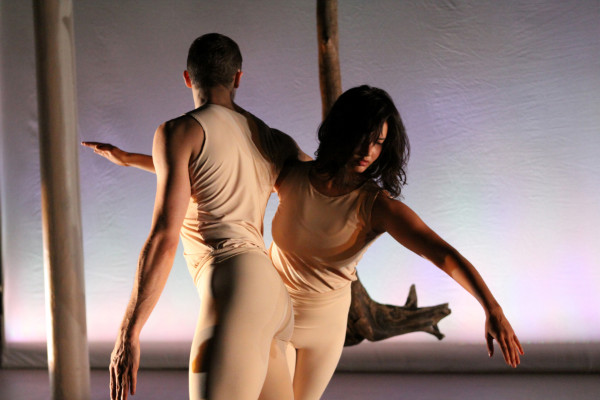 BOTTOM LINE: Wooden is an environmental installation and dance performance concieved and choreographed by Laura Peterson. The concept is superb, but it outshines the performance.

Wooden is a dance commissioned by HERE which culminates Laura Peterson’s artistic residence at the company, and it is a truly experiential performance. Peterson creates an entire environment for her contemporary dance in the now unrecognizably transformed HERE mainstage space. As the audience arrives, they are privy to an introductory solo performance before entering a room hung with white curtains and made into a neutral cube. Real turf is laid out and driftwood hangs from the ceiling. You can smell the earth — it’s breathtaking! (Even more so if you have allergies.) By putting the natural elements within this unnatural space, it is much more specific and poignant than any simple outdoor performance.

This focus on nature is apparent in the movement within the first half of the performance. Set to a nondescript soundscape of sustained tones and something akin to crunching gravel by designer Soichiro Migita and the music of Venetian Snares, the physicality bears influences from yoga and ideas of blowing wind and moving grass. In fact, as the company sweated, the grass from the turf started sticking to their faces and bodies — very cool.

At intermission the audience is asked to leave the space so that it can be rearranged. In contrast, for the second half the nature becomes disconnected and removed from the performers and performances. The sound for this portion is tech-heavy and the movement sharper — more straight lines, more direct paths, less attitude and transverse, carving gestures. The sound is hard to listen to, harsh, grating, and somewhat creepy crawly. I interpreted this portion as a comment on our modern removal from nature as opposed to the first half’s communing with the elements. But that assignation of meaning exposes my own feelings on the subject.

Amanda K. Ringger’s lighting is as exceptional as the scenic design by Peterson and Jon Pope. Used for more than just breaking up episodes, the diverse lighting takes advantage of all sides and angles without ever illuminating the audience. It is much more detailed and diverse than one usually sees in a dance show, much like the installation setting. Similar kudos to Candice Thompson; her costume design is an inspiration of what can still be accomplished visually and functionally on a small budget. Every off off Broadway experimental show should be calling this talented woman who makes beautiful, conceptual clothing that’s simple.

Within the piece, there are vivid shapes, the best of which are static, evocative weight-sharing moments between the dancers, and some lovely motion between standing and being on the ground. However as a whole, the movement is so light and carving that it begins to feel general and blurs. I found myself craving a stronger focal point or more structure in the formation and pathways. I also missed faces and connection from the performers, and a sense of the unexpected. In the moments when I felt like I was invited to participate as an audience member, Wooden was exciting, but for much of the time I was more impressed by the grass than what was happening on it.

The two strongest moments of the evening are the conclusions of both halves. Part one ends with the dancers reaching backward, blindly, for one another, and part two ends with a section of sharp, focused phrase in a presentational “V” formation with bound, strong effort quality. In these moments a connection and focus is present.

What Laura Peterson and the rest of her design team did with the space is noteworthy and exceptional. They took a black box theatre and turned it into a whited installation of nature as an idea and as an experience. It’s truly artistic and inventive. I only wish the movement has been as exciting and luminous. Nonetheless, what Peterson is doing with Wooden is exciting and inspiring; it could be enjoyed by anyone who likes pushing performances into an experience and reaching audiences through all their senses.