What Happened in Ohio

Written and Directed by Cara Scarmack; Produced by The Roadsters 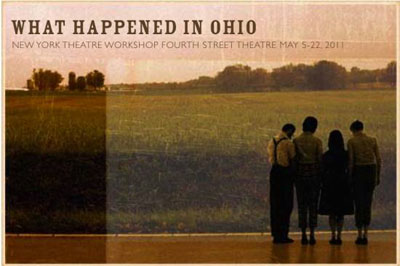 BOTTOM LINE: This experimental work is a collection of vignettes featuring music, movement, dialogue and other creative techniques.

A simple, well-designed set -- featuring a giant quilt, old-fashioned shelves and a hanging mandolin framing an otherwise empty stage -- greets the audience as they enter the New York Theatre Workshop's Fourth Street Theatre. It immediately evokes the old Midwest and conveys a certain mysterious drama to come. As What Happened in Ohio begins, music is heard from the back of the house and the four actors, Priscilla Holbrook, Ashley Nease, Stephanie Viola and Nathan Richard Wagner, enter singing and playing acoustic guitars. This homey, all-American folk-inspired song is rousing and a lovely introduction to The Roadster's first production.

When the song concludes, however, the tone takes a turn with one character's violent outburst. This begins -- and conveys -- the experimental quality that the production will take on. The Roadsters use short bursts of dialogue, choreographed movement, singing and other theatrical techniques to present this tale.

What Happened in Ohio revolves around four siblings who were abandoned after their parents were killed in an automobile crash, but since the story isn't linear and is told through creative devices, the details of the narrative aren't always clear. The only way to truly follow the vignettes is to read the program, which is something I recommend doing before the first act begins, and even then, literal sense of the production is hard to find. The subject matter is equally non-linear, jumping from eggs to air conditioners to pancakes, with physicality and screaming in between. The highly active movement, which includes a lot of jumping and crawling, helps to show the characters' struggles and draw the audience in to 1950s Middle America.

The show was assembled in a collaborative fashion with no initial script. (Read the Theasy interview with The Roadsters here to learn about their process). It also includes 10 original songs that were written by the cast specifically for this production. The show seems to have grown out of loose improvisation and movement to create a series of moments.

I hope the Roadsters continue to develop this piece, as there is a lot of enthusiasm and determination with this project, evident from the production itself. The experimental nature might be off-putting to traditional theater patrons, but if The Roadsters continue to refine the show and let their strengths shine through, What Happened in Ohio will be an even more engaging production.