Woman Before A Glass 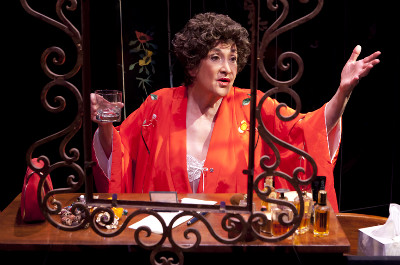 BOTTOM LINE: The good by far outweighs the bad in this solo show, which is both immensely humorous and heartbreaking.

Peggy Guggenheim (Judy Rosenblatt) lived under the public eye as heiress to the Guggenheim family fortune. Although she inherited millions, rather than billions (due to her father leaving the family business), Guggenheim spent her life devoted to fostering artists and the arts. She nurtured great artists by sending them stipends, helping to keep starving artists like Kadinsky from starving. And she opened up her bed to some of the great artistic minds of the twentieth century, claiming to have had affairs with numerous famous men including Samuel Beckett and Yves Tanguy.

Woman Before A Glass covers a five year span of Guggenheim's life, ranging from 1963-1968. Divided up into four segments, the play explores different times in her life from various locations within and just outside her Venetian home. While often humorous and wry, the story also tackles the darker aspects of Guggenheim's life.

Peggy Guggenheim was clearly a woman ahead of her time. Despite being born in 1898, she cast aside the societal restraints forced against woman and spent much of her life single and sleeping with whomever she pleased, all while buying glamorous gowns and drinking with fervor. Despite being in her sixties during the span of time captured by the play, she tells bawdy jokes about her sexual experiences all while shaking up martinis, pouring glasses of gin, and lighting up cigarettes. Clearly, this aging party girl has never really left the party.

The play opens with Guggenheim sitting in her garden preparing to be filmed by an Italian television crew. In her arms she carries a largesse of fancy dresses which she rummages through as she tries to find a suitable outfit for her party that evening. She shakes up martinis and lights up cigarette after cigarette while linking tales of her sexual encounters with famous men to the pile of dresses. She extends a red taffeta dress explaining that it was a gift from the wife of artist Tanguy, and that she kept the dress only out of guilt as she was sleeping with him at the time. She holds up another rather short dress, wisecracking that it would be perfect were the night's plans to consist of "dancing, cocktails, and oral sex." She explains that she began amassing her large art collection when, during her affair with Samuel Beckett, he told her that if she didn't know what to do with her small fortune, she should buy modern art "because it's living."

Despite keeping up a steady pace during the majority of its segments, Woman Before A Glass hits a bit of a lull during the second part, partly due to the script, and also to the fact that Guggenheim sits towards the back of the stage away from the audience during much of the scene. But keeping a solo work afloat for 90 minutes is by no means an easy task, and as a performer Rosenblatt lights up the stage with her seemingly limitless energy.

The play is at its strongest during the third and fourth segments, which show Guggenheim discussing and suffering the greatest tragedies in her life: her father's death aboard the doomed Titanic and her daughter Pegeen's suicide. Guggenheim feels sadness that she could nurture and support so many artists, but that she could not save her daughter from her demons. Rosenblatt's true talent as an actress (as well as Austin Pendleton's skill as a director) shines as her performance rings true and sucks the audience in.

By the play's end, Guggenheim is shown with a bittersweet calmness, as she announces her decision to allow her large art collection to continue living on after her in her Venetian home. These emotional moments in the script were enough to win Mercedes Ruhl an Obie award during the original New York staging in 2005. The smallness of the Abingdon Theater's stage works to the play's advantage, as Rosenblatt is able to directly address members of the small audience, making eye contact during her monlogues. Overall, despite a few lulls in both staging and script, Woman Before A Glass is an enjoyable and compelling work, giving Peggy Guggenheim her due credit.